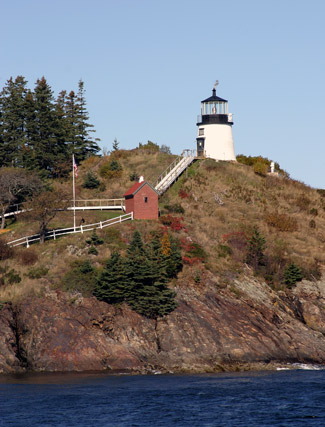 Captain Stuart Ames had skippered his mail boat along the Maine shoreline for years, so he knew his way around the rocky ledges of the area. But when a snowstorm blew in, all he could see was a white fog. In the 1930’s there was no GPS and no radio contact. Where was he? Did anyone know?

Back home, his wife became worried when he was hours overdue. She called the light keeper at the Owl’s Head Light Station to ask if he had seen the boat. The keeper told Mrs. Ames the snow storm had completely blocked his view of the water. That’s when she asked for Spot’s help.

Spot was the springer spaniel that belonged to the lighthouse keeper. He had been trained to pull the fog horn rope with his teeth to signal passing boats. When the boats heard the horn, they honked their own horns in response. Spot would then rush down to the water’s edge and bark until the boat was out of sight. The mail boat was one of Spot’s favorite boats because Mr. Ames often brought him a treat.

Mrs. Ames asked if the fog horn had been sounded. No, she was told, because the bell was frozen solid. So she asked if the keepers would let Spot out. They agreed, but he soon returned wet and cold, then curled up by the fire. Suddenly, the dog sprang to his feet, and started scratching at the door. When they let him out this time, he ran to the bell, but when he couldn’t get it to ring, he ran to the beach and began barking frantically.

A blast sounded from the mail boat, and Spot’s barking became more frantic. Three more sharp blasts let Spot and the keeper know Captain Ames had heard the dog and found the channel back to port. Two hours later, the grateful captain made it safely home.

I can imagine how lonely Captain Ames must have felt, being lost in the snowy fog, not knowing where he was and wondering if anyone else did. What a relief he must have felt to hear the familiar sound of Spot’s barking.

Have you ever felt “lost in a fog,” not knowing where you are, but hoping someone cares enough to find you? Listen. God knows where you are, and He’ll guide you to safety.

“But whoever listens to me will live in safety and be at ease, without fear of harm.” Proverbs 1:33