A Frightful NIght at the Lighthouse

A Frightful NIght at the Lighthouse 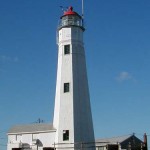 “I’ll be okay.” Mac struggled to speak as he patted Polly’s hand on his shoulder while the ambulance attendants lifted the stretcher. “Don’t worry about me.”

“I wish I could go with you.” Polly fought back tears as her husband was carried out the door.

“You need to stay here with the children. God will take care of us.”

Polly replayed the scene in her mind as she sat in their upstairs bedroom in the lighthouse keeper’s house. She scanned the room where just a few hours before, her husband had a massive heart attack. How could she rest, with worry about her husband’s condition keeping her awake?

She propped herself against some pillows on the bed and opened a book. Thankfully, the children were sound asleep and hadn’t been aware of the crisis that happened earlier.

The sounds of the stormy night distracted her – the wind howled fiercely out of the north, shaking the whole house, while the foghorn blasted steadily, competing with the wind for attention. Even the old fireplace joined the cacophony, adding its own fearful noise.

It was the kind of night when Martin might appear. Although she’d never witnessed him before, the house was rumored to be haunted by a ghost. Polly didn’t believe in such things and dismissed them as nonsense.

Yet, out of the corner of her eye, she saw a cabinet on the right side of the fireplace open. No. This wasn’t a ghost, just the house responding to the pressure of the storm. She slipped out of bed and with trembling legs, walked over to the cabinet and closed it.

There. The problem was solved. She went back to the bed, sat down and picked up her book. Then, glancing up, she saw the left cabinet open. Her heartbeat raced, pounding in her ears. Slowly, she allowed herself to gaze around the room, half-expecting to see a ghost. Was that a chuckle she heard? No. The window was rattling, fighting to stay in place while the wind pushed against it.

Steeling herself to stand again, she rushed across the room to the open cabinet and slammed the door with a resounding thud. She jumped, surprised by the noise she’d made. Had she awakened the children? Yet, somehow, they slept through all the racket.

She returned to the bed, but this time picked up a different book on the bedside table and opened it. Her gaze fell on 2 Timothy 1:7 in her Bible, “For God has not given us a spirit of fear, but of power and of love and of a sound mind.” She closed her eyes and prayed, releasing her anxiety to Him.

As the storm outside abated, so did the turmoil within herself. The noises faded into the night, and she was finally able to sleep peacefully.

“Peace I leave with you; my peace I give you. I do not give to you as the world gives. Do not let your hearts be troubled and do not be afraid.” John 14:27