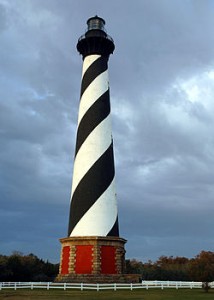 In the 1800’s, the area outside of the Outer Banks, North Carolina, had so many shipwrecks, it became known as the “Graveyard of the  Atlantic.” This danger was caused by the treacherous Diamond Shoals, shallow  sandbars that extend fourteen miles from the shore.

To solve the problem,  a taller lighthouse was built in 1870 to  replace the existing one, making it the tallest lighthouse in America. The  beacon of the lighthouse was visible twenty miles from shore, warning ships  that they were near the dangerous area.

Many times we can’t see our way out of the situations we’re  in. Every place we look, there is another problem, or something else to  complicate our lives. We wish we could see our way clear and find the path to  safety and peace.

I think of how the lighthouse was high enough to be seen, but also, if one were at the top, they too, could see how far out the shallow  waters were. Do you ever wish you could look down on your life from a higher perspective and see the whole picture? Sometimes we’re just too close to our  problems to have another perspective.

I’m thankful that God has that higher perspective. He can  see everything- the past, the present, the future, and He can warn us about the dangers in our paths, if we just pay attention to His guiding light.

“From heaven the LORD looks down and sees all mankind; 14 from his dwelling place he watches all who live on earth— 15 he who forms the hearts of all, who considers everything they do.” Psalm 33:13-15