When Terry Rowden first saw the pretty blonde girl at the Cutler, Maine, Post Office, he knew she was the girl for him. But first, the young Coast Guardsman had to convince her, not to mention her parents.

Terry was stationed at the Little River Lighthouse at the time, at 21, a young man. However, Cynthia was a senior in high school.

As the Assistant Officer in Charge, he and one other Coastie, Johnny, managed the light station. With only two men running the station, it was difficult for one of them to leave for any length of time.

But when Terry found out about Cynthia’s senior prom, he made up his mind that no one else would be her escort. The night was clear when, all decked out in his rented tuxedo, he left the island in the station boat to make the mile-long trip across the harbor to pick up his date.

He told Johnny he’d be back around 12:30 that evening. But typical of the Maine coast, fog had rolled in when it was time for Terry to go back to the island. Since the lighthouse is on the opposite side of the island facing out toward the Atlantic, there’s no light at the dock on the harbor side, and the island was completely hidden from view.

Terry called Johnny from the mainland and told him to start the engine on the winch at the boathouse so the noise would guide him back. But as he motored away from town, Terry didn’t hear the sound of the loud engine. With no compass on board the boat and the fog hiding the island, Terry began to shout, hoping Johnny would answer.

When he heard Johnny’s voice, he followed it until he saw a flashlight on the shore. For some reason, though, Johnny thought Terry had come from a different direction, so he walked along the rocky edge of the island, trying to find Terry. Meanwhile, Terry followed the beam from the flashlight.

Later, Terry confessed that he would have been in serious trouble had Johnny fallen and hurt himself while climbing over the slippery boulders along the shore. After all, Terry was supposed to be on duty.

But nothing was going to keep him from being with the girl he loved. Not distance, not water, and not even fog.

“Many waters cannot quench love; rivers cannot sweep it away.” Song of Solomon 8:7

In the same way, God loves us beyond all barriers.

“For I am convinced that neither death nor life, neither angels nor demons, neither the present nor the future, nor any powers, neither height nor depth, nor anything else in all creation, will be able to separate us from the love of God that is in Christ Jesus our Lord.” Romans 8:38-39 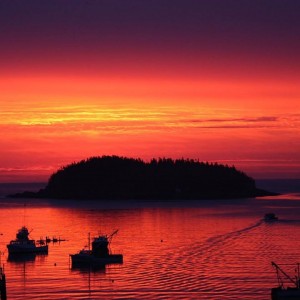 O yes, Terry and Cynthia did get married. They’re about to celebrate their 45th anniversary!