A Lighthouse Under the Sea?

A Lighthouse Under the Sea? 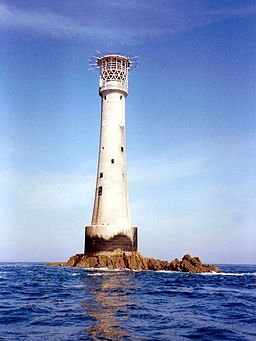 “It’s going to be a rough one.” Mr. Bromley, one of the keepers at the Bishop Rock Lighthouse, looked out the window at the angry Atlantic off the coast of England.

“Graham is downstairs checking the bolts and bars on the doors. I’ll go recheck the windows, make sure the shutters are tight.” Keeper Johnson started out the door.

A powerful wave hit the lighthouse, which shuddered as if an earthquake had struck. The keepers reached out to steady themselves.

“Yep. Swells are coming from the southwest. We’re in for a major storm.

Graham walked into the keeper’s quarters, located on the sixth floor of the 160-foot lighthouse.

“You’re wet.” Mr. Bromley nodded at Graham, his clothes dripping on the floor.

“Stood by the door at the wrong time.” Graham removed his jacket and hung it on a peg on the wall.

After the keepers were satisfied that everything had been checked, they sat down to a game of cards. The wind howled and roared at such magnitude that hearing each other talk was difficult. Every so often, the waves rose high enough to wash past the windows. Johnson glanced from Graham to Bromley.

“You think the waves will reach the lantern room?”

As if on cue, a wave rushed over the building, covering the entire tower. The noise was swallowed up by the sea, and the room became eerily silent. Instinctively, the keepers bowed their heads, praying the lighthouse would stand. After an interminable amount of time, which may have been only seconds or minutes, the wave passed and the noise of the wind resumed.

A collective sigh escaped the keepers as they resumed their game, thankful to be out of the watery tomb.

It’s difficult to believe that waves could rise high enough to reach the top of such a tall lighthouse. Yet, in severe storms, it occurred. Can you imagine what it felt like to be the lighthouse keepers when it happened – covered by the sea, the light and noise of the world shut out? They hoped, prayed, and trusted they would come out of the storms safely and see a peaceful day again.

I wonder what it was like for Christ when he was inside the tomb? Completely quiet. Alone. Dark. No crowds. No shouts. No freedom. And yet, he didn’t stay there. He stepped out of his prison of death and by doing so, gave us the freedom of life. And because he did, we will.

“For great is your love toward me; you have delivered me from the depths, from the realm of the dead.”  Psalm 86:13