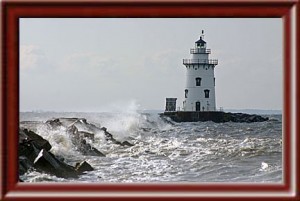 Walking to school is not unusual. However, walking half a mile across a pile of stone rip rap in the middle of a river can be challenging.

Seven year-old Doris McLintock had to make this walk each school day between her home and the mainland. She lived at the Old Saybrook Breakwater Lighthouse, built at the end of a breakwater near the mouth of the Connecticut River. Fortunately, Doris didn’t have to make the trip alone. Her father always went with her to make sure she was safe and didn’t fall off the wall or in between the stones.

Flat stones across the top of the breakwater made walking somewhat easier; however, in wet weather, the stones became slick and in cold weather, often iced over. When the weather was warm and pleasant, Doris enjoyed taking in the view, listening to the cry of sea gulls and the blasts of ship horns.

But in the winter, chilling winds gusted across the water, splashing waves and spray high over the wall, making the walk hazardous. On those days, going to shore was not possible. And, sometimes the weather was unpredictable. One day Doris was at school and her father came to take her home early, due to the threat of an oncoming storm.

As they returned along the breakwater, the tide was already high as water crashed over the wall. Doris and her father hurried along the top, trying to dodge each wave. When they reached the middle of the breakwater, a giant wave headed straight toward them. There was no place to go. They couldn’t escape. Doris’s father braced himself and held her tightly as the wall of water covered them. Miraculously, they stayed on the wall.

Years later Doris was asked if she was ever afraid living in the midst of howling winds and high seas. In her book, Dory of the Lighthouse, she said, “I don’t remember being frightened, no doubt because my father was always near.”

Thank God, we have a heavenly Father who is always with us.

“Yea though I walk through the valley of the shadow of death, I will fear no evil for You are with me;” Psalm 23:4 NKJV