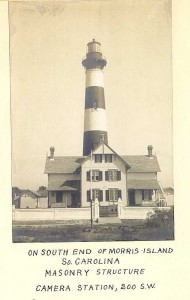 I’ve been here a long time, about 200 years so far. I remember when I was brand-new the first time, before the American Civil War. I’ve watched all types of boats pass by, showing them the right way to go, and warning them where not to go. A lot has changed since I was young, yet I’ve survived.

It was harrowing, to say the least, to be on my island in the middle of the entrance to Charleston harbor during the war. Both sides wanted my service. I only wanted to perform the duty for which I was built, yet I was damaged, taken apart, even partially destroyed. It was a relief when the war ended and they rebuilt me, gave me new lens, new paint, and renewed my life. Yet, after my rebuilding, they altered the channels, and the changed  course caused the sea to beat mercilessly against my island, stealing bits of it  and reducing its size. But the sea left me alone – for awhile.

Then in 1885, a hurricane attacked our coast, destroying many of the  buildings and bridges around me. My light was out for a few days, but soon I was shining again after they repaired my damage. I was back in service again – for another year.

But in 1886, a severe earthquake rocked our area, knocking out my lens and cracking my tower. However, once more I was repaired and I survived to shine again.

For another hundred years, I manned my position, although erosion was removing more of my island. I watched them build another lighthouse on the northern side of the harbor. I suppose they thought I might not survive much more erosion. But I did, and then another, bigger problem occurred. In 1989, Hurricane Hugo (they started naming these storms?), hit our coast with such ferocity that it wiped out all the remaining buildings on my island. Where once there were fifteen buildings, including a keeper’s house, a little schoolhouse, and others, now there was nothing else but me. I stood alone. They decided my light was no longer needed and started using the newer one on the other side.

Now, I have no island and no light. I stand alone in the 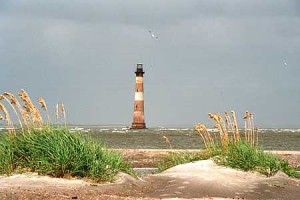 water. But there are people who still care for me and they started Save the Light to help me. They’ve built a new barrier around me to help me stand, and they’re planning to make me a famous tourist attraction. Me! Famous! After all these years, after wars, hurricanes, earthquakes and erosion, I still stand because I’ve been saved.

“We are hard pressed on every side, but not crushed; perplexed, but not in despair; persecuted, but not  abandoned; struck down, but not destroyed.”2 Cor. 4:8-9

It’s the beginning of a new year, a time when many of us  take the opportunity to start over and make positive changes in our lives. Thank God, we don’t have to wait until another year passes to start over each time we make a mistake. He is the author of new beginnings, and lets us start over everyday, forgives us for our mistakes, and helps us make the changes we need to make.