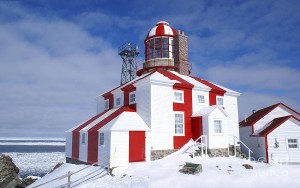 Private William Duval shivered as he rubbed his hands together over the small stove heater in his barracks. Man, this place was cold! Despite sharing a room with 19 other guys, the room never warmed up.

Some of the guys didn’t mind the cold so much. But back home in Louisiana, it just didn’t get as cold as here in Newfoundland. Why couldn’t he have been sent somewhere warm?

But then again, that’s where a lot of the fighting was – in the Pacific islands. Guess he should be thankful he wasn’t sent there. Who would’ve thought he’d end up in Canada, on a US base built to protect the northern coastline from German invasion?

He glanced at the pinup calendar hanging over his bed, his heart squeezing at the sight of his girlfriend’s picture thumbtacked over the movie star’s photo. Christmas was just weeks away, and what he wouldn’t give to spend it with Angela back home. Home where it was warm, where family and friends gathered together for food and fun. He could just see them all going around singing Christmas carols to their neighbors. If only the war would end before Christmas. Chances were slim with all the heavy fighting going on, but a guy could hope, couldn’t he?

His buddy Pete came in, slamming the door against a blast of frosty air. “Billy! We’ve been invited to the lighthouse for Christmas. Wanna go?”

“I hear the family there is swell – and real big too! Seems folks all around here go to the lighthouse for Christmas. Sounds good to me!”

When Christmas day arrived, Billy and a bunch of other soldiers climbed into an Army Truck. After plowing through the deep snow, they reached the end of Cape Bonavista where the white lighthouse with vertical red stripes gleamed in the sunlight. Billy stepped inside the house and an array of tantalizing aromas drew him toward a table laden with food. Trays of Christmas cookies lay beside towering cakes and golden-crusted pies. At the other end of the table, platters of sliced meats and bowls of steaming vegetables invited.

A teenage girl ran up and introduced herself as one of Lightkeeper Hubert Abbott’s eleven children. Soon Billy’s stomach was full of Christmas dinner. Afterwards, he joined in the singing as everyone gathered around the family parlor while a man played Christmas carols on an accordion.  After singing, the folks played a variety of games, just like they did back home. As daylight began to dwindle over the Atlantic Ocean, Billy said his goodbyes to the hosts.

“Thank you, Mr. Abbott, Mrs. Abbott. You really made me feel like family today.”

“We’re glad you came, Billy. We’re all part of God’s family, and what better time for a family to be together than Christmas?”

Billy didn’t get to go home for the holidays, but thanks to the Abbotts, he didn’t spend the holiday alone.

The holidays can be a lonely time for people separated from their families. Many find the holidays especially difficult because their loved ones are no longer alive to share them.  God wants us to reach out to others, not just at Christmas, but all year long. Perhaps this Christmas you can invite someone into your home, or find others who are alone and create a family environment together.