A Statue, A god, and A Lighthouse?

Home/Lighthouse Blog Category, Uncategorized/A Statue, A god, and A Lighthouse?
Previous Next

A Statue, A god, and A Lighthouse?

The Colossus of Rhodes was one of the seven wonders of the ancient world. And it was a lighthouse.

Approximately 100 feet high, the huge statue was built to honor the mythical god Helios, Greek patron god of the sun, after a year-long attack against Rhodes failed. When Demetrius of Alexandria finally abandoned his attempt to siege the island, he left much of his military equipment behind. To celebrate their victory, the Rhodians melted down the weaponry into bronze plates which they bolted together and filled with rocks and dirt to make the statue.

Facing east where the sun rose, it supported a fire beacon either in a torch held up by an arm, a brazier on its head, or possibly even inside the head to make the eyes glow. No one knows for certain what it looked like, since it collapsed when an earthquake struck the area 56 years later.

Artists through the centuries have imagined the statue straddling the entrance to the Rhodes harbor, but it is unlikely the statue was built there, since the harbor would have been blocked for the twelve years of construction, and it would have fallen in the water instead of on land when it collapsed. It probably stood near the present Agios-Nikolaos Lighthouse in a commanding position overlooking the entrance to the Rhodes harbor, much like the Statue of Liberty oversees the entrance to New York City’s harbor. 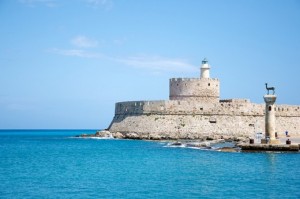 The earliest records from someone who actually saw the statue are from Pliny the Elder, 79-26 BC, who saw the broken pieces lying on the ground not long after it fell. Even then, he was amazed by its size, saying “Few people can make their arms fit around its thumbs.”

The ruins lay where they fell for 800 years because an oracle advised against rebuilding the statue. Finally the pieces were sold to Arabs, who broke down the ruins even smaller and carried the bronze away on the backs of hundreds of camels to be re-melted into other items, most likely, and appropriately, lamps.

Such a humble end from such a grand debut. One has to wonder about the power of a god that falls apart when the earth moves. I’m glad my God is stronger than that, so I don’t have to be.

“God is our refuge and strength, an ever-present help in trouble. Therefore we will not fear, though the earth give way and the mountains fall into the heart of the sea.” Psalm 46:1-2