The storm is finally passed. It’s time to survey the damage left behind.

For some, the damage is extensive, for others, it’s minimal. Even when expected, storms can still cause damage. Before our current weather technology, people were more vulnerable to storms because they had little or no time to prepare.

The St.George Island Light withstood years of storms. Each one undermined its foundation until it finally fell over into the water in 2005.

Sometimes after I’ve weathered a personal storm, I feel like the picture of the lighthouse – fallen apart, unable to stand any longer. A picture of defeat, 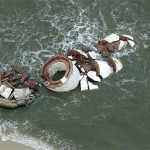 even when you’ve tried hard to stand your ground, the emotional and sometimes physical strain takes its toll.

But there’s good news. A group of concerned citizens decided to salvage the lighthouse and put it back together. They moved each brick and piece of it to a new site which is more solid ground and reconstructed it to its former glory. Now the lighthouse proudly stands as a testimony to hope and commitment.

Like the lighthouse, I don’t have to fall apart. Thank God, I can lean on Him to get through the difficult times, as well as friends who care about me and can help me regain my strength and peace.

“We are hard-pressed on every side, but not crushed, perplexed, but not in despair, persecuted, but not abandoned, struck down, but not destroyed.”      2 Cor. 4:8-9