An Unexpected Guest at the Lighthouse

Home » An Unexpected Guest at the Lighthouse
Previous Next

An Unexpected Guest at the Lighthouse 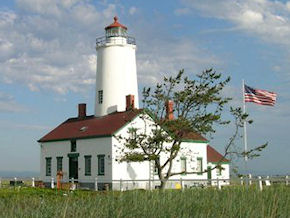 “What’s that noise at the door?”  Mary Ann, her eyes wide with fear glanced at her husband, Keeper William Blake.

“You stay back. I’ll take a look.” He grabbed his gun and headed for the door of the keeper’s house.

The whooping of Indians had awakened them during the night. A band of peaceful Indians camped at the beach that evening on their way back to British Columbia, but the startling noise told the keeper and his wife something was wrong.

Keeper Blake opened the door a crack and peered out.  As his eyes adjusted to the dark, he scanned the horizon. A moan caused him to look down. An Indian woman lay bleeding just beyond the entrance, her arm reaching out for help.

They carried the young woman inside and saw that she had been stabbed multiple times. She was pregnant. Mary Ann rushed to grab some towels.

“Do you think we can save her?”

“I don’t know. We can try.” Mary Ann began to wash off the woman’s wounds, bandaging them with strips of cloth. “Let’s see if we can get some warm tea down her. She’s shivering.”

In broken English, the woman told them her band of Indians had been attacked while they were sleeping by another group of Indians who were their enemies. Everyone in her party had been killed except her, pretending to be dead until the raiders left after taking everything they could from the bodies. Somehow, she had crawled to the lighthouse keeper’s house for aid.

Keeper Blake went up to the tower to look. With his spyglass, he saw bodies lying near the campsite. There was no sign of the other Indians.

When he went back down to tell his wife, there was a knock at the door. He and Mary Ann exchanged glances. Once again, he took his gun and opened the door. Standing outside were several of the Indian attackers. Blake aimed his gun at them.

“Get away from my home!”

“Give us woman!”
Blake stepped forward, aiming the gun at the leader’s head. “Go! Now!”

The Indians looked at each other, then retreated and left.

The woman stayed with the Blakes until her wounds healed, while they made sure she had food and a safe, warm place to stay before she returned to her own people.

Keeper Morgan went to the door, opening it to find a young Indian brave standing there.

“You the lighthouse keeper?” The Indian pointed to Morgan.

“I come to say thank you for saving my life.” The Indian extended his hand.

“I’m sorry, but I don’t remember meeting you.”

“You saved my mother when she carried me.”

“Come inside. I’d like to hear your story.” As he ushered the Indian into the house, he called to his wife. “Francis, set another plate for dinner. We have a guest.” Keeper Morgan knew about the Indian massacre that happened there many years before, when William Blake was the keeper. Now it was his turn to extend hospitality.

Happy Thanksgiving! May you find a way to share your blessings with others.