Home » Beacon of Freedom
Previous Next 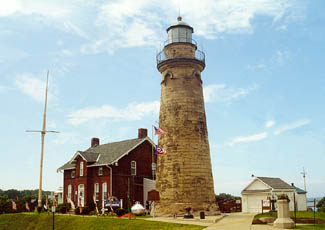 To many, lighthouses represented guidance and safety.

But to runaway slaves in the 1800’s, the Fairport Harbor Lighthouse represented freedom.

Built in 1825, the Fairport Harbor Lighthouse in Ohio is located at the mouth of the Grand River where it flows into Lake Erie.

Fairport’s townspeople were strongly against slavery and when the Fugitive Slave Act was passed in 1850, the people were violently opposed to it. Tavern owner Samuel Butler became chairman of a citizens’ group that sought to repeal the law, and his Eagle Tavern became a safe haven for escaping slaves and the headquarters for those willing to help. Anti-slavery sea captains, sailors, townsfolk, and lighthouse keepers worked together to hide the runaway slaves and smuggle them aboard ships bound for Canada. 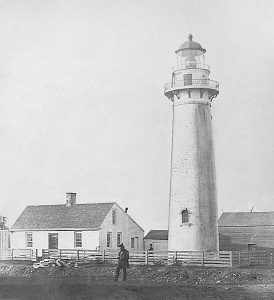 Often the slaves were hidden high in the lighthouse, safe from slave masters of the neighboring state of Kentucky, who roamed the streets of Fairport, searching for their slaves.

To these runaway slaves, the lighthouse was the last stop on the Underground Railroad and the first step toward freedom.

I will walk about in freedom, for I have sought out your precepts. Psalm 118:45