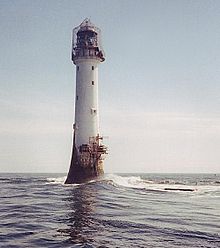 Robert Stevenson took a deep breath and straightened his vest before walking in. He knew what to expect from the Board – “no, too expensive, impossible.” But maybe this time would be different.

Maybe this time he’d convince them to authorize the building of his lighthouse on Bell Rock. Maybe, after the recent wreck of a warship with all those poor souls lost, the Board would listen to reason and prevent future tragedies.

The young Scottish engineer entered the room and presented his revised proposal to the somber-faced men. When he was finished, the chairman spoke. “Mr. Stevenson, we appreciate your plan, and we’ve decided to go forward to get the legislation through Parliament.

However, due to your relative inexperience, we’re going to offer the project to Mr. John Rennie, who is not only more experienced, but has a plan less costly than yours. But, we would like to hire you as Mr. Rennie’s assistant.”

Stevenson nodded, but his heart sank. He knew his plan would work. He was the one who’d been petitioning the Board since 1799, not Rennie. But he wouldn’t give up. He’d oversee the project and implement his own plans as he could.

Rennie was preoccupied with other projects elsewhere, so seldom visited the site, leaving Stevenson in charge of the entire construction, laborers and supplies.

Part of Stevenson’s unique plan was to build a barracks on the reef where the laborers could live instead of being brought back and forth. Until the small barracks were finished a year later, the men stayed on a ship anchored a mile away. Work could only be done from May until October due to the harsh winters, resulting in long days of labor. 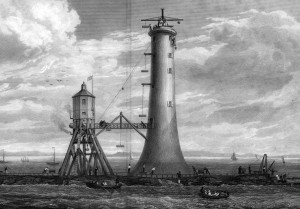 The project took four years to complete, during which time the men suffered cramped living conditions, absence from families, dangerous conditions, and numerous obstacles. Stevenson lived alongside them, sharing the same conditions. Occasional visitors to witness the work in progress questioned his Spartan life, and Stevenson’s response was that the Bible was his only essential possession.

In February, 1811, Bell Rock Lighthouse was lit, and Stevenson saw his persistence pay off. To bless the building, Stevenson offered this prayer. “May the Greater Architect of the Universe under whose blessing this perilous work has prospered, preserve it as a guide to the mariner.”

Since the lighthouse has been built, only two ships have wrecked – one during WWI during a national blackout when the light was out, and another during fog.

The masonry work was constructed to such a high standard that it has not been replaced or altered in 200 years, and Bell Rock has the distinction of being the world’s oldest surviving sea-washed lighthouse.

Robert Stevenson’s persistence paid off. He believed in his plan, his ability to manage the project, and his Creator to bless his work.

Do you have a plan or a project that keeps running into obstacles? Keep trying. If you believe in your idea, keep knocking on heaven’s door for help to get it done.