Bolivar Point – A Lighthouse, a Weapon, and a Sanctuary

Home » Bolivar Point – A Lighthouse, a Weapon, and a Sanctuary
Previous Next

Bolivar Point – A Lighthouse, a Weapon, and a Sanctuary 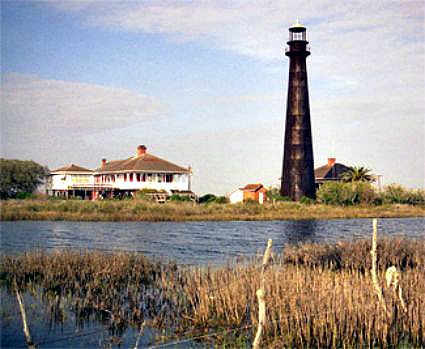 The first Bolivar Point lighthouse was built in 1852 to guide ships into the port of Galveston, the most active port west of New Orleans, and the largest city in Texas at the time. The 65-foot tower was built of iron sections made in Baltimore, then shipped to Texas where the lighthouse was erected. By 1858, an additional 24 feet of iron was added to raise the height of the tower.

Only three years later, Texas seceded from the Union at the beginning of the Civil War. Most lighthouses in the south were darkened, their lenses removed and hidden, in an effort to hinder enemy ships from finding southern ports or avoid dangerous obstructions.

However, the Bolivar Point lighthouse had a different fate. Because iron was so valuable during the war, the lighthouse was completely dismantled and the iron was used as armor plating for ships and for the production of cannon balls and mini balls.

The lighthouse was rebuilt in 1873 constructed of the same type of cast-iron plates as the original, but the new one’s interior was lined with brick. 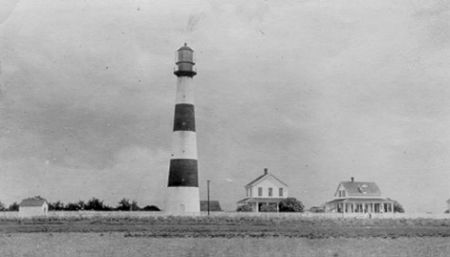 In 1894, Harry C. Claiborne was assigned as keeper of Bolivar Point lighthouse. His wife Virginia complained that “life was very lonely and friendless. There is very little visiting because travel is nonexistent from the point to Galveston.”

But when the devastating hurricane of 1900 swept through Galveston, Virginia’s loneliness ended. During the height of the September 8 storm, 120 people took refuge in the iron lighthouse. Sitting by twos on the spiral staircase, they huddled together while winds as high as 145 miles per hour shook the structure. When the storm ended and flood water receded from the tower, the Claibornes fed the hungry and now homeless people until the lighthouse rations ran out.

In August 1915, the scene was repeated when sixty people sought sanctuary in the lighthouse from another hurricane. Assistant Keeper James Brooks stood watch in the lantern room during part of the storm saying afterwards that the top of the tower “shook and swayed in the wind like a giant reed.” When the rotating machinery quit working due to the shaking of the tower, Mr. Brooks resorted to turning the light by cranking it by hand until the vibration became so great that he could no longer turn it. Once again the Claibornes provided aid for their neighbors, even though their own home had been demolished in the storm.

The Bolivar Point Lighthouse was decommissioned in 1933 and is now privately owned, but its role in the community as a guide, a weapon and a sanctuary played an important part in the history of Galveston.

Sometimes, we, like the lighthouse, are called to serve different purposes at different times. Will we be able to accept the changes like the Apostle Paul did as he stated in Philippians 4:11 (NIV)?

“I have learned to be content whatever the circumstances.”