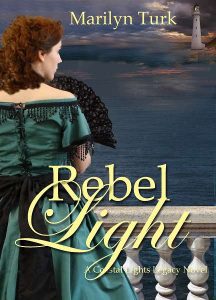 She ran away from the war only to find herself in the middle of it. Who will protect her now?

It’s 1861, Florida has seceded from the Union, and residents of Pensacola evacuate inland to escape the impending war. But Kate McFarlane’s impulsive act of rebellion changes her life and that of many others in ways she never expected.

As a result, Kate finds herself with an eccentric aunt in an unfamiliar place. Lieutenant Clay Harris, a handsome Confederate officer, offers a chance for romance, but his actions make Kate question his character. When a hurricane brings an injured shipwrecked sailor from the Union blockade to her aunt’s house, Kate fights attraction to the man while hiding him from Clay. She’s determined to warn her sea captain father about the blockade, but needs someone to help her. Who can she trust – her ally or her enemy?

“Rebel Light by Marilyn Turk is an absolutely delightful yet compelling read. If you like Civil War stories, romance, and heart-pounding action, you will love this book!” —