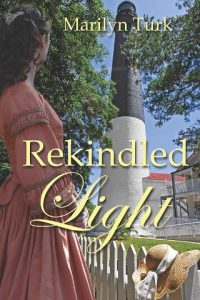 At the onset of the Civil War, Sarah Turner’s hope to marry fiancé Josiah Hamilton crumbled when her father forbade her to ever see Josiah again because he chose the Union side. Now the war has ended, and Sarah and her family return to Pensacola to start life over. For seven years, Sarah harbored hope that she and Josiah could be reconciled, but she never heard from him again, and her father is pushing her toward marrying his business partner, a man Sarah has no attraction to. But when she sees Josiah with another woman, her hope of a future with him ends. Lieutenant Josiah Hamilton has returned to Pensacola as well, as an engineer for the US Army with orders to find the original lens of the Pensacola Lighthouse and build the new keepers’ house. He still loves Sarah, but when he sees her with a young child, assumes she is married, and the child is hers. Meanwhile, Josiah is being pursued by the lightkeeper’s daughter and distracted by an apparent plot to prevent him from carrying out his job.Who is the arsonist starting fires at area lumber mills? What will happen when Sarah’s life and Josiah’s mission collide with someone who wants to end them both?