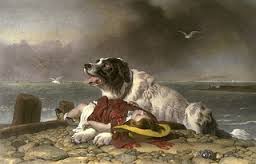 Buddy took his job at the lighthouse seriously. As watchdog for the lighthouse, his devotion and service were outstanding. When ships approached Mount Desert Rock Lighthouse, he’d greet them with enthusiastic barking. Often, he’d dive into the water to welcome newcomers to the island.

Among Buddy’s duties was dragging driftwood up from the rocky shore for the keeper’s family to use as firewood. His other, very important duty was to guard the children while they played outdoors.

One day the keeper’s five-year-old son played outside near the house while his mother did housework. Unknown to her, the child wandered away. Half an hour later Buddy bounded into the house, barking and whining to get her attention. But the woman assumed the wet dog had just retrieved more driftwood and ordered him out of the house. He returned moments later with the child’s soaked and tattered hat, dropping it at her feet.

The alarmed mother ran from the house and followed Buddy, finding her child unconscious, wet and cold. He had apparently fallen into the sea and the dog had plunged in after him. His clothes were torn to shreds by the dog’s teeth as the animal dragged the child to safety. Though bruised and scratched, the child survived, thanks to Buddy’s watchful eye and quick response.

There are numerous stories of dog mascots in the Coast Guard files. The animals were valuable co-workers among the people they served, working at lighthouses and lifesaving stations, on lightships and tenders. “Man’s best friend” was often man’s best assistant.

Today’s blog is dedicated to Buddy, our family dog and companion, who has left this world after 17 years of unconditional love and steadfast devotion.

The above story is based on a true story by Kirk Monroe published in Scribner’s Magazine in 1896. The dog in Mr. Monroe’s story was unnamed, however, it might have been “Buddy.” 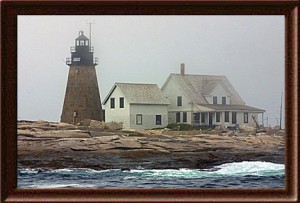