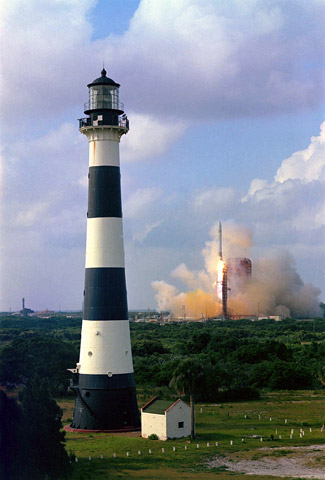 When Cape Canaveral Lighthouse was first lit in 1848, its location was so remote, no one but the keeper and his family lived near it.

However when the Civil War broke out in 1861, Keeper Mills Burnham had unexpected company. Under the orders of the new Confederate Light House authorities, he was commanded to remove the lighting apparatus of the lighthouse to assure that offshore Union ships would not benefit from its light and not be warned of the dangerous shoals which extended for twelve miles off the cape. Burnham did as he was instructed, taking the apparatus apart, crating it up and moving it to his orange grove where he buried it.

Keeper Burnham, his wife and five daughters lived in their home in the orange grove while the lighthouse stayed dark throughout the war. Two Union camps were in the area, but Burnham’s family was safe from intrusion as Union blockade ships patrolled the ocean nearby.

Unfortunately, civilian boats were impacted by the missing light in the lighthouse too, and in 1865 a small schooner from New York wrecked just off the cape. Two sailors drowned, but the captain, his wife and three other sailors made it to shore. When they went to the lighthouse, they found it deserted. However, they managed to find the Burnham’s home in the orange grove where the starving survivors were provided with a warm fire, food and clothing and were nursed back to good health. 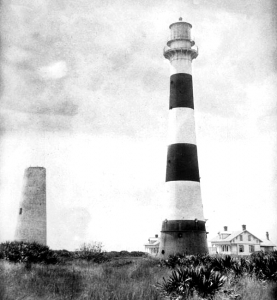 When the war was over, Burnham was able to retain his position as lighthouse keeper at the lighthouse, but the government decided to build a newer, taller tower to replace it. Therefore, it was 1868 before the new Cape Canaveral’s lighthouse was lit, and Burnham stayed in his position until his death in 1896.

The lighthouse was still active when, in the 1950’s, it acquired a noisy new neighbor. The Cape Canaveral Joint Range Proving Ground began launching rockets, disturbing residents of towns that had sprung up nearby. Soon the towns became government property and the citizens left, but the lighthouse keepers, being government employees, were allowed to remain. However, in 1967, the lighthouse was automated and the keepers were removed.

Is there someone you can show hospitality to this year?