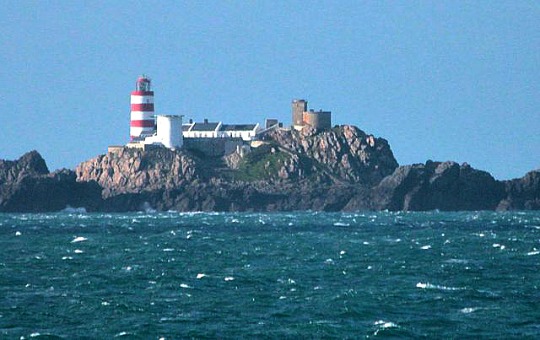 One of the blessings of writing about lighthouses is meeting other people who love lighthouses, especially those who work with them. Since there are few lighthouses that still employ keepers, it is quite a pleasure to meet a keeper. I have been so thrilled to get to know Gordon Partridge, a former lighthouse keeper in the U.K. Last Christmas, he shared one of his stories with me (and you) about serving at the Needles Lighthouse during Christmas. This Christmas, he shares another Christmas story from the time he served at Les Casquets Lighthouse in the Channel Islands.  Below is his story in his own words, since I love the way he tells a story. I hope you’ll be as blessed by it as I am.

A memory of Christmas meaning.

I was duty watch at midnight on Christmas Eve. My thoughts were of my family at home and how much I missed being with them, especially in the morning when excited children would be waking to their Santa Claus deliveries!

It was a cold, starlight night, and the sea was amazingly calm. Some miles away, I could clearly see the lights of shipping as they made their way “up channel” towards the Strait of Dover and I wondered, and empathised as they too, were away from home, just like me.

The marine radio was eerily quiet save for the occasional static crackle, when, in a moment of impulse, I keyed the Mike and called out, “A Very Merry and Peaceful Christmas and God speed, to all out there, from Casquets Lighthouse!” What followed,found me frozen with human emotion, as for some 10/15 minutes, the airway was alive with festive greetings, some in English, but most in languages totally unknown to me, yet the warmth within their voices told me that they were well meant greetings reciprocating my original call.

So many of us, each away from where our hearts really wanted to be, sending love and fraternal feelings to their brothers and sisters at sea on Christmas Night.

After I had collected my thoughts, I once more stared out at the myriad of lights on the water and uttered a quiet “thank you” to my unknown friends.

Truly, a Christmas night that will live with me forever.

May God fill your heart with hope and love this Christmas!
“And the angel said unto them, Fear not: for, behold, I bring you good tidings of great joy, which shall be to all people.” Luke 2:10 KJV