Fall Traffic at the Lighthouse

Fall Traffic at the Lighthouse 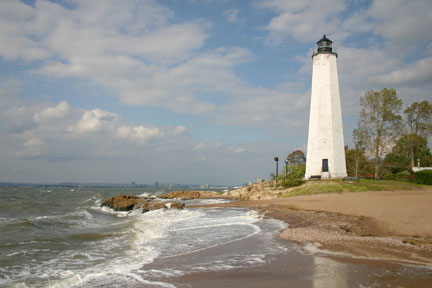 There’s an incredible amount of traffic past the Five Mile Lighthouse at Lighthouse Point, Connecticut during the month of September.

But it’s not the amount of boating traffic passing the lighthouse into New Haven Harbor.

No, this stream of traffic is in the air. Airplanes, you say?

No, it’s not airplanes either. This air traffic consists of thousands of birds and butterflies that pass the lighthouse on their migratory route to South and Central America, making Lighthouse Point one of the best places to witness the annual ritual.

A vast variety of birds can be seen at the Point.  Falcons, hawks, American kestrels, harriers, sharpshins, merlin and osprey have been spotted. In addition, flocks of bobolinks, warblers, cedar waxwings, red-winged blackbirds, American robins, plus many other species fly overhead.

One of the most amazing birds to pass the lighthouse is the hummingbird. On one day in early September an incredible 450 hummingbirds were counted flying by as they followed the Eastern shoreline on their southern migration. 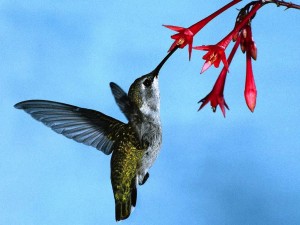 The smallest breeding bird found in Canada and the United States, the hummingbird is an amazing creature. Besides insects, hummingbirds in flight have the highest metabolism of all animals, a necessity for the rapid beating of their wings during hovering and fast forward flight. Their heart rate can reach as high as 1260 beats per minute in flight and even 250 beats per minute at rest.

While flying, a hummingbird’s oxygen consumption per gram of muscle tissue is about ten times higher than elite human athletes. To survive, hummingbirds must consume more than their own weight in nectar each day, accomplished by visiting hundreds of flowers. Because they are continuously hours away from starving to death, they store just enough energy to survive overnight.

Equally amazing is the fact that every year, these tiny birds travel hundreds of miles south to their wintering grounds in Central and South America. So how does a little bundle of feathers that weighs little more than a penny fly nonstop for over 500 miles across the Gulf of Mexico?

Apparently, the hummingbird’s system is triggered by shortening days that signal the end of summer and approach of colder weather. The bird reacts by putting on as much weight as it can, at least doubling its weight as it travels south, so by the time the birds start their over twenty-hour flight across the water, they have plenty of stored up fuel.

One might think the life span of these petite animals would be very short. On the contrary, they can live as long as ten or eleven years.

“And God said, ‘Let the water teem with living creatures, and let birds fly above the earth across the vault of the sky.’ So God created the great creatures of the sea and every living thing with which the water teems and that moves about in it, according to their kinds, and every winged bird according to its kind. And God saw that it was good.” Genesis 1:20-21

And you are just as amazing, just as unique. Thank God for His creative power, which is still at work in His whole creation.