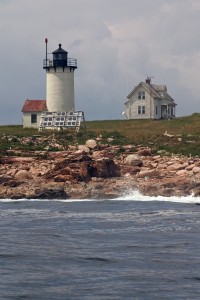 “Boys, better stay inside today,” Dalton’s mother said as she stirred a pot of soup. “The weather’s too cold and nasty to be outside.”

Dalton and his brother looked out the back door of the keeper’s house, their hopes of outside adventure dashed. The island was covered in white winter fog, veiling everything on the island with a curtain of obscurity. Ever since their father had become lighthouse keeper at Great Duck Island Lighthouse, Dalton and his brothers had enjoyed hours of roaming the twelve-acre island. But not today. No one would be out in this weather.

“Let’s play checkers!” Dalton ran to get the board. They sat at the kitchen table and played until they got bored with the game. Dalton stood and stretched. “I’m tired of sitting still.”

‘Me too. Why don’t we play hide and seek?” Dalton’s brother Eddie suggested

Mother had gone into the parlor to work on some mending, so the boys turned out all the lights in the kitchen and closed the curtains to darken the room.

Dalton crouched down in the corner behind the cupboard, holding his breath so he wouldn’t make a sound and give his location away to Eddie. He waited, listening for Eddie to move around the room.

Eddie listened too, expecting Dalton to make some noise and disclose his hiding spot. But all was silent.

Then he heard a noise, but it sounded like it came from outside, not inside. “Dalton, are you there? Do you hear something?”

In his hiding place Dalton froze. “Eddie, I’m over here. I hear the noise too.”

Dalton stood up and Eddie came to his side. “What is it?”

Again, they heard the noise. “Sounds like something rubbing together,” said Dalton.

The boys crept over to the window and peered out.

“Look! Out there by the fence!” Eddie pointed.

Beside the wooden fence were two white forms. The boys watched in horror as the forms moved toward the house, the noise growing louder all the while.

“Dad!” They ran to the parlor where their father sat at his desk, making notes in the keeper’s log.

Keeper Reed set down his glasses to look at his sons. “What’s got you two so worked up?”

Trembling, the boys pointed outside. “There’s something white coming through the gate,” said Eddie. ”They look like ghosts!”

“And they’re making the most awful noise!” Dalton added.

Their father raised his eyebrows, then stood and grabbed his coat off the peg. As he approached the door, something rapped on it.

“Never knew of ghosts knocking,” said their father as he opened the door.

Outside two fishermen stood, shivering from the cold. Covered from head to toe in ice, they explained to Keeper Reed that their boat had broken down between Duck Island and Mount Desert Rock. They had rowed to the island as the icy ocean sprayed them.

Keeper Reed invited the men came into the house, and as they entered, the boys heard the noise again. It was the crunch of their frozen oil skin clothes when they walked.

The boys helped them out of their icy clothes, then Mother poured bowls of soup for the “ghosts.”

Like Dalton and Eddie, we often make judgments about people based on something we hear or see, and also like the boys, our judgment is wrong. Thank God, He sees us for who we really are.