Hanging on for Dear Life

Hanging on for Dear Life 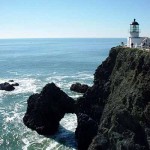 “Dinnertime!” Mrs. Martin shouted to her children playing outside the lighthouse keeper’s house.

One by one the youngsters came inside. All but Dorothy.

“Last time I saw her, she was chasing the cat.”

“Go ask Father if she’s with him.”

“Dorothy,” they answered in unison.

Everyone looked at each other as fear registered on their faces.

“She was wearing a harness, wasn’t she?” Keeper Martin asked.

“Yes, sir, we were all wearing ours.”

“I’ll go look. You stay here.” Keeper Martin went outside, hoping he wouldn’t see his daughter fallen down below the cliff.

Lighthouse keepers were happy to have their families with them as they performed their service. But in some locations, families presented an extra area of concern.

This was particularly true at Point Bonita Lighthouse in California, perched high on a cliff above the ocean. Keeper Martin, realizing the dangerous location for his children, had rigged up harnesses for them to wear when they played outside. Each harness was tethered to a stationery point so the children would not be lost off the edge.

Keeper Martin carefully followed the direction of the tether, looking for her daughter. “Dorothy! Dorothy!” His voice was barely audible above the crashing waves below.

“Papa! Papa! I’m down here!” Relief fought with fear as he moved toward the sound of the little voice. Did he really hear her or was his hope imagining the sound? As he reached the edge, he peered over and saw Dorothy safe, but dangling over the side in her harness. Thankfully, he was able to pull her back to safety.

The story reminds me of one Jesus told about the lost sheep. In it, he told of a shepherd going in search of the one sheep that was missing from the flock. Jesus compared himself to that shepherd when he explained his reason for being here.

Are you barely hanging on? Cry out to Him and He’ll pull you up.