This post was originally published on Sept. 1, 2012. I think it is a good time to republish it. 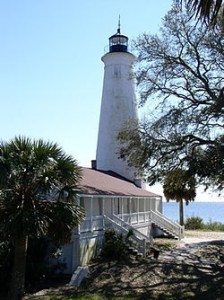 Capt. John Hungerford stood on the gallery of the St. Marks Lighthouse scanning the horizon. There was a storm brewing out there over the Gulf of Mexico. The sky had been overcast for two days. The air was still and quiet. He walked around the gallery, looking for signs of wildlife, but saw none in the marshy area behind the lighthouse where normally, hundreds of birds were evident. They had left the area, their natural instinct telling them to fly away to safety.

He watched the tides, each time going out farther than usual, each time coming in closer to land. The year was 1843, and as the lighthouse keeper, it was his duty to warn others about danger. But this time, there were no ships in sight. The wind picked up with gusts that increased in intensity.

He ran down the stairs to the attached keeper’s house and told his wife to get the children and prepare for a bad storm, possibly a hurricane.

“The Johnsons are here.” His wife looked out the window to see neighbors arriving.

“The water must be rising on the river. They can help us nail the shutters.”

Soon another family arrived, it too seeking higher ground as the river encroached on their farm.

As the skies darkened, the waves rose and pitched, dirty with sand they churned up from the bottom. The wind roared as the water steadily climbed. Soon the waves reached the keeper’s house, lashing out with fury and beating against the sides. The house shook from the combined attack of wind and water, the occupants screaming with each jolt.

Soon water poured in through cracks and started flooding the house.

“Up the stairs to the tower! We must get higher!” The keeper led his family out and up the steps of the lighthouse with the others following closely behind.

Water rushed in behind them as they were unable to close the door. As they tried to climb the eighty-two steps of the tower, they held onto each other for dear life. The roar of the wind drowned out the cries for help from those trapped below.

Finally, the storm abated and the water receded. Only the light keeper and his family survived, the unfortunate ones below them perished.

In Psalm 61:2-3, David said, “From the ends of the earth I call to you, I call as my heart grows faint; lead me to the rock that is higher than I. For you have been my refuge, a strong tower against the foe.” He used the analogy of climbing to a higher, solid rock, and a strong tower for protections against his enemies. He knew that God was his rock and his protection from harm.

In the same way, we face our own personal storms. We feel like we’re buffeted by winds of resistance, drowning in a sea of troubles. Yet we cannot get out of our situation without the Lord’s help. We need someone or something stronger than we are. We need to look up to higher ground where the Lord can lift us out of our turmoil.

Hurricanes still force people to seek higher ground for safety. We, too, still need to seek God in our times of trouble.

Singer/songwriter Lynn DeShazo has written a wonderful song based on this psalm called “Lead Me to the Rock.” It is on her  “More Precious than Silver” cd. You can listen to it at http://www.cdbaby.com/cd/lynndeshazo2