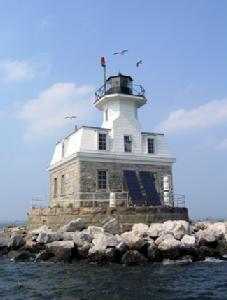 For sale: 150-year-old lighthouse, keeper’s house included.
Historic waterfront  property with spectacular view. Buildings in need of repair and paint. No electricity. Accessible only by boat, and that only from April to September.  No neighbors, no telephone, no Internet.

How would you like to have your very own lighthouse?  Impossible, you think? On the contrary, lighthouses go up for sale every year.

Once an important aid to navigation, many lighthouses are now unnecessary, due to modern technology and satellites.  While the US Coast Guard still operates 250 lighthouses, there are others that are only important to local citizens and historians. They know that the lighthouses represent a piece of history, an important part of who we are.

To own a lighthouse is to own a piece of that history, to become part of the history itself. It is possible, but it comes at a price.

There’s another history we can be part of. And this history is free to us. History is “His Story,” God’s story. It’s about God’s love for mankind and how God came here in human form to demonstrate His love for us. It  cost Him a lot. It cost Him the grief of seeing His Son sacrificed for us. Yet, He offers this at no cost to us. We can become part of His Story by simply believing in Him. Then our story becomes part of His Story.

“Yet to all who did receive him, to those who believed in his name, he gave the right to become children of God” John 1:12