Holding Onto Hope at the Lighthouse

Home » Holding Onto Hope at the Lighthouse
Previous Next

Holding Onto Hope at the Lighthouse 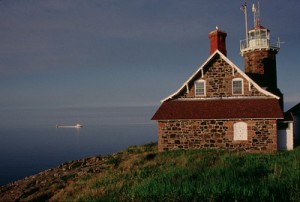 “See that nest down there?” Anna pointed down to a ledge on the cliff below the lighthouse.

Larry, a boy who was visiting the island, peered over and nodded.

“Do you want to get it? It’s got eggs in it.” Joanna, Anna’s younger sister added.

“Sure, but how can I get down there?”

“We can tie a rope around your waist and lower you.” Anna said, then ran to get the rope.

Larry allowed the girls to harness him with the rope and slowly climbed over the edge. “You better hold on tight to me!”

“We will!” The girls echoed in unison, as Anna held the rope while Joanna held onto her sister as they lowered their new friend. “Let us know when you can reach the nest.”

The girls pulled and pulled, but they couldn’t get Larry back up. For some reason, he was much heavier to pull up than to let down. Soon Larry was screaming as he dangled high above Lake Superior. Anna screamed back, telling him she was still holding on and not to worry, even though he was slipping farther down as she spoke. Joanna ran for help.

When he understood what his hysterical daughter was saying, Keeper Bowen and his assistant, the boy’s uncle, hurried to the edge and took the rope from Anna. However, not even the two men could pull Larry to the top of the cliff. His uncle decided to get the lighthouse boat and position it under the boy and attempt to catch him. Telling Larry help was coming, the men yelled to each other above the noise of the incoming tide until he was lowered to the awaiting boat.

Once Larry was safe, everyone realized one of the reasons it was so difficult to rescue him was because he would not let go of the nest he had taken from the rocks. If he had, he could have been able to grab hold of the side of the cliff and climb back up as they pulled.

As I read this story, I realized how much like Larry I am. Often I find myself hanging onto hope, waiting impatiently for it to arrive, yet I’m holding onto something else that prevents me from being fulfilled. It may be a habit, a hangup, or a hurt, but I need to let it go so I can find peace.