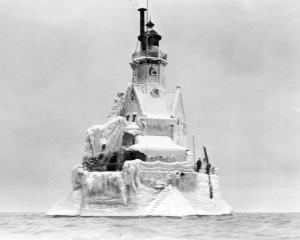 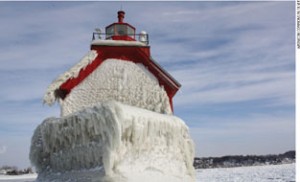 Just how cold is it? If the pictures circulating the Internet are any indication, it’s cold enough to freeze lighthouses. Perhaps the most photographed are the lighthouses of the Great Lakes, which become beautiful ice castles when stormy waves meet  frozen temperatures.

These awe-inspiring pictures of this and previous years’ ice lead one to wonder if anyone was inside the lighthouses, and if so, what was it like?

However, there have been some lighthouse keepers that became stranded in their frozen lighthouses.

Terry Pepper shared some research he did on the Racine Reef Lighthouse, which is two and a half miles offshore of Racine, WI. This lovely Victorian lighthouse, whose architecture reflected that of the town, was built in 1906 to warn mariners traveling between Milwaukee and Chicago of the dangerous Racine Reef.

Several times in its history, the Racine Reef Lighthouse was encased in ice during December, preventing the lightkeepers from getting out and obtaining supplies. Once in 1929, the doors and windows were frozen shut, and with no chance of thawing, the keepers broke a window and chopped their way through the ice to escape. Another time, five Coastguardsmen chained themselves together and pushed a skiff loaded with food three miles across the ice to reach the starving keepers. 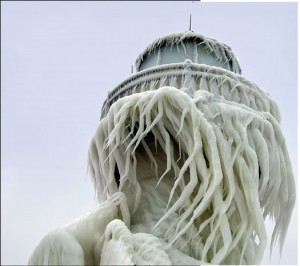 Winter has the same effect on vegetation, forcing it to rest until spring’s new growth begins.  Much of the animal kingdom rests as well, and goes into hibernation until winter is over.

Winter slows us down too. Airports, schools and business are forced to close, and people are told to stay inside and warm when winter storms make it dangerous to be out.

There’s a reason for winter, besides the earth turning on its axis. God created seasons so the earth will function properly. Each season prepares the earth for the next. In the same way, we have seasons in our lives. Whether it’s a winter when we’re resting and dormant, or spring when life is abounding in blessings, each season has its purpose. It may seem like winter has you iced in and unproductive, but remember, winter is a time of preparation for the next season of growth. Meanwhile, rest inside your castle.

“The breath of God produces ice, and the broad waters become frozen.” Job 37:10