Iced Over at Spectacle Reef

Home/Lighthouse Blog Category, Uncategorized/Iced Over at Spectacle Reef
Previous Next

Iced Over at Spectacle Reef 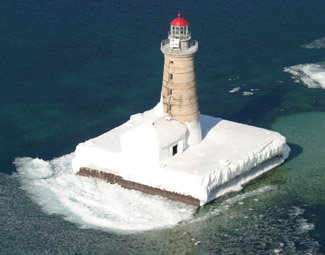 Located in Lake Huron, Spectacle Reef is subject to the conditions of the Great Lake. From December through March, the lake is covered with ice. The lighthouse keepers played roulette trying to guess when it was time to go back to the mainland, since shipping stopped during that time on the lake. When winters came early and with brutal temperatures, keepers could find themselves stranded with no way out.

Such was the case in December 1927, when the three keepers were trapped inside the lighthouse for four days. Thick ice covered the lighthouse, blocking the tower’s doors.  On December 14, 1927, the crew of the Poe lightship arrived to rescue them. The keepers’ only way out was by crawling through a two-foot window high in the tower, from which they were lowered to the ship by a rope. 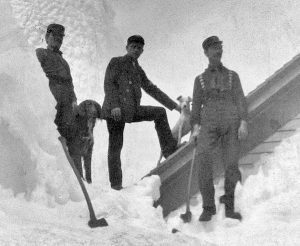 In late March 1972, the keepers were taken to the lighthouse for reopen it for the season by the Coast Guard cutter Sundew. The cutter was forced to ram through the ice surrounding the lighthouse before they could reach the structure. Once they reached the lighthouse, the ship sent some of its crew on the crew to chop thought about five feet of ice before they could reach the door. Once inside, the keepers slept in sleeping bags the first week until the furnace finally raised the inside temperature to sixty-five degrees. It wasn’t until the first of July first that the last piece of ice finally melted off the northwest side of the pier.

In May 2014, the lighthouse was deemed excess by the Coast Guard and has since suffered neglect until it was sold at auction. The property is now managed by the Spectacle Reef Preservation Society, who plan to restore the lighthouse to its former glory. According to their website, https://spectaclereef.org. 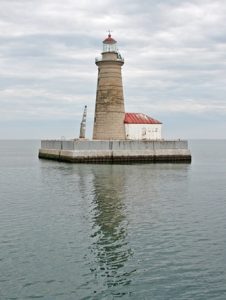 “The goal of the Society is to restore Spectacle Reef and open it to the public as a “Learning Light” and museum where people can discover not only the history of this unique structure but also the service and sacrifice of those who manned it to keep others safe.   The restoration will be a multi-year project with the plan of being operational in time to celebrate Spectacle Reef’s 150th anniversary in 2024.”

Part of the Society’s goals is to “Establish full time keeper programs on site during the operating season to educate visitors and continue restoration and maintenance projects.”

If you would like to help them accomplish their worthy, ambitious goals, your contributions are welcome, as well as any hands-on work you can do. They promise you will not be ice-bound in the process.

There is a time for everything, and a season for every activity under the heavens: … a time to tear down and a time to build.” Ecclesiastes 3:1,3b