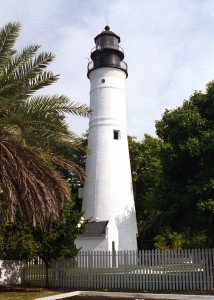 They followed their husbands, the lighthouse keepers, to each lighthouse they were assigned, often not knowing what awaited them. For some who came from families of lighthouse keepers, the lifestyle was familiar. But for many, the role required a transition from living among civilization to being apart from it.

They were the wives of the keepers. These women cared for their husbands, their homes and their children. At lighthouses where there was only one keeper, the wife served as his assistant, sometimes officially, but often unofficially. Whenever the keeper had to leave the station to run errands, the wife had to maintain the light in his absence. If the keeper became ill, the wife was the one who stayed up all night to keep the light burning, as well as, care for her sick husband.

This duty was added to her regular duties of cleaning, cooking, laundry and caring for the children. She was the teacher, the nurse, and the gardener. And when the lighthouse inspector arrived, her house was expected to be white-glove spotless, like the lighthouse. He would go through the keeper’s house, running his hand along tops of doors and cabinets to make sure there was no dust in the dwelling, and take note of anything else out of place or considered unclean.

Before telephone lines connected the lighthouses to the rest of the world, the only contact to remote stations was by mail delivered on the lighthouse supply boat, and the regularity of the boat depended on the weather and the time of year. It could be a lonely existence for women without the companionship of friends or extended family. 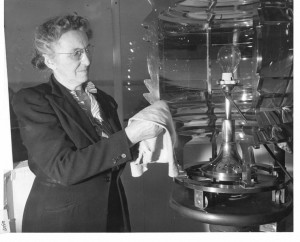 Lighthouse mothers often had many children – six or more was normal. One advantage to having a large household was the extra help with chores as the children grew older. A houseful of children also helped alleviate the loneliness, if not increase the anxiety. These mothers were mindful of the dangers present at lighthouses – from falling down the lighthouse steps to being swept off the land by waves to tumbling over the edge of rocky cliffs.

In the event of her husband’s death, his wife was expected to maintain the light until another keeper was appointed. For many years, women were rarely allowed to take over as the head keeper, based on the belief that only a man could handle the job, even when the wife had been the assistant. Sometimes the appointment was given to the oldest son. Such was the case of Sarah Luke, whose husband Paul Luke, keeper of Old Point Comfort Lighthouse in Virginia, died. Even though her son John received the appointment, Sarah still carried out the duties, making her the first, but unofficial woman keeper on the Chesapeake Bay. 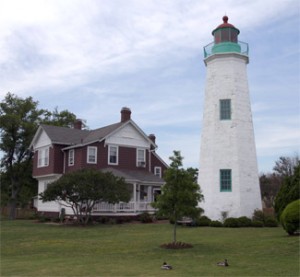 Fortunately for women, Stephen Pleasanton’s appointment as the administrator of lighthouses in 1820 proved to be an advantage. No longer were women required to have a male family member take over the lighthouse duties. Mr. Pleasanton sympathized with the widows of lighthouse keepers, knew their need for income, and recognized their experience as superior to placing new people in the positions.

So, in honor of Mother’s Day, let’s remember those hardworking, devoted lighthouse mothers with the words from Proverbs 31 in the Bible.

“She is clothed with strength and dignity; she can laugh at the days to come.
She speaks with wisdom, and faithful instruction is on her tongue.
She watches over the affairs of her household and does not eat the bread of idleness.
Her children arise and call her blessed; her husband also, and he praises her:
Many women do noble things, but you surpass them all.
Charm is deceptive, and beauty is fleeting;
but a woman who fears the Lord is to be praised.
Honor her for all that her hands have done,” Proverbs 31:25-31a

May God bless all mothers everywhere.