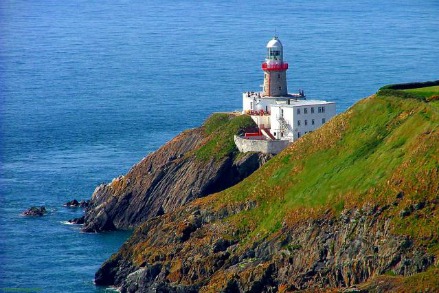 In honor of St. Patrick’s Day, this blog is dedicated to Irish lighthouses and the guiding light they have provided for over 300 years.

Baily Lighthouse shines its light out twenty-six miles to sea from its position on cliffs which extend into Dublin Bay. It is one of Ireland’s most photographed lighthouses on the eastern coastline.

The first lighthouse was erected at this location in 1667 by Sir Robert Reading, authorized by King Charles II. A square cottage-type tower unique to Ireland with a coal-fired beacon was built, parts of which still remain high on the headland .

In 1790, the coal-fired beacon was replaced by six oil lamps with a silvered parabolic mirror and a “bulls-eye” glass pane to focus the light.

The light was often hidden by fog, due to its position high on the hill, so a new light was authorized to be built lower, farther down the cliff. The new tower and keepers’ dwelling was finished and lit on St. Patrick’s Day, March 17, 1814.

Over the years, a number of vessels wrecked on the nearby rocks, creating a call for a fog horn at the lighthouse.  After two major accidents occurred resulting in the loss of many lives, a foghorn was finally installed in 1853. During the 1860s, Baily Lighthouse received improved lights, and the fuel burned in them was switched from oil to gas.

The lighthouse converted to electricity in 1972, and modern technology made light a secondary warning system, when a radio beacon became the primary method of warning ships until 1999, when it was replaced by a radar system.  The fog signal was discontinued in 1995.

In late 1996, the Commissioners of Irish Lights converted Baily Lighthouse to automatic operation, making it the last Irish lighthouse to become automated.

On March 25, 1997, the last Irish lighthouse keeper left the lighthouse. I wonder if this old Irish blessing was on his mind when he left. May it be on yours.

May the road rise to meet you,

May the wind be always at your back.

May the sun shine warm upon your face,

The rains fall soft upon your fields.

And until we meet again,

May God hold you in the palm of his hand. 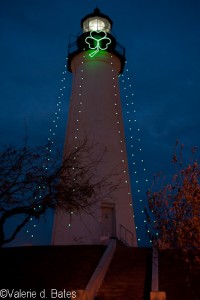