Invisible Enemy at the Lighthouse

Invisible Enemy at the Lighthouse 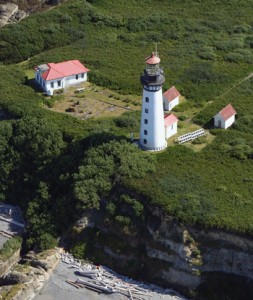 A low, menacing sound rolled across the pasture of Destruction Island, startling the grazing cows and sending them running in all directions. To the ears of the only bull, the noise signified an enemy, an intruder into his kingdom.

Where had this other bull come from? The thirty-acre island was three miles from the mainland and only reachable by boat. Even if a brave bovine swam the distance, scaling the eighty-foot cliffs would be impossible.

The intermittent noise continued, infuriating the resident bull and alerting him to battle. He must find this adversary and fight to prove control over his domain. In the fog, he couldn’t see the other bull, so he followed the sound as it grew louder, drawing him closer and closer to his foe. The more he focused on the threat of an opponent, the angrier he got, picking up speed as he raced towards the noise.

As he neared the lighthouse, he spotted a small building that seemed to be the source of the noise. No doubt the other bull was inside. The picket fence that surrounded the building proved no obstacle to the charging bull as he attacked, crashing through the walls of the fog signal house. He charged again and again, damaging everything in sight, but there was no other bull and therefore no threat. The rampage continued until the bull tired of his imaginary battle.

It was only then that the lighthouse keepers were able to corral the bull. The new fog signal was turned off until the men could create a temporary enclosure for the animal. Eventually, a stronger pen was built to withstand the ire of the bull each time the foghorn was used. Weeks and periods of fog passed before the bull adjusted to the sound and realized he had no enemy to fight, no threat to his territory. 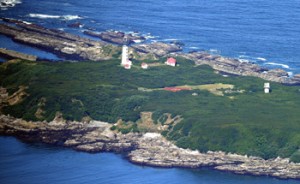 Of course, we wise humans can laugh at a “dumb” animal who doesn’t understand the difference between a fog horn and another bull. Yet, how close do we come to mimicking the angry bull? Do we take offense when none is intended? Do we fly into a rage when we misinterpret a comment or action as an insult? Do we let our imaginations run wild with imagined worries and fears that don’t exist? Too often, humans are just as misled, just as easily provoked, just as easily worried.

The Book of Proverbs in the Bible talks about these things.

“Fools show their annoyance at once, but the prudent overlook an insult.” Prov. 12:16

“An angry person stirs up conflict, and a hot-tempered person commits many sins.” Prov. 29:22

“Anger is cruel and fury overwhelming,” Prov. 27:4a

And that’s no bull.