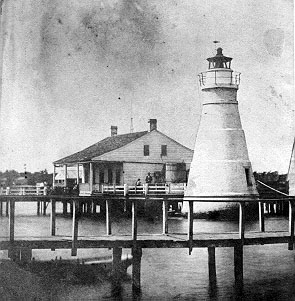 What was Margaret going to do? Her husband, the keeper of the Head of Passes Light Station in Louisiana, had just drowned,  leaving her with two small children. What else, but take over her husband’s  duties?
Thus Margaret Norvell became a lighthouse keeper in 1891. In 1896, she was  reassigned to be the keeper of the Port Pontchartrain Light Station on Lake  Pontchartrain in Louisiana at the treacherous mouth of the Mississippi River.
And for the next 36 years, she handled the job of keeper and was credited with  rescuing many shipwrecked sailors. In 1926, after receiving word that a Navy  plane had crashed into the lake, she rowed two hours in a dangerous squall to  rescue the pilot and return him to the lighthouse.

When Mrs. Norvell was interviewed after her  retirement about her outstanding commitment, she replied, “There isn’t anything  unusual about a woman keeping a light in her window to guide people home. I  just happen to keep a bigger light because I have so many people to get safely home.”*  In other words, it was just her job.

What Mrs. Norvell said reminded me of the last conversation I had with my mother. She was in a hospital bed after breaking her  hip and suffered from congestive heart disease. I hadn’t seen her often because  I lived in another state, but she was still lucid enough to ask me how I was  doing, and how my children were. She said, “I worry about you.” I’d heard this  from her my whole life and didn’t understand. However, that day I asked her  about it. “Why, Mother? Why do you worry about me?” Her response, “That’s my  job.” And then I understood what she meant. It was just her job as a mother to  worry about, to care for me, her child.

I wonder if Mrs. Norvell ever thought she couldn’t  handle the responsibility. Did she think the job was too big for her, too  demanding? If she did, it didn’t stop her from doing the best she could with  what she had. Why? Because it was her job.

Sometimes I’m faced with a responsibility which  seems too big for me to handle. I doubt my ability and fear failure. I know  there are others that feel this way too, whether as a boss, an employee, a  spouse, parent, grandparent, caregiver, etc. We wonder if we are up to the task  and often wish there was someone else who could take the burden from us. So how  do we handle the duty, the job?

The truth is, we don’t have to handle it alone. God  says He comes alongside us and helps to carry our burdens. We are not alone,  and we don’t have to worry about our ability. He can handle it. That’s His job.