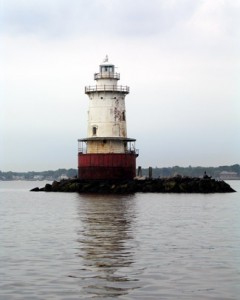 “I’ll get Martha and return shortly!” John Cook waved to his mother-in-law, Louisa Weickman, as he boarded the lighthouse launch. John’s wife Martha had gone to stay with friends on shore, thinking a vacation from the water would help her feel better. After a few weeks, she sent word saying she was well and ready to return to the Stamford Harbor lighthouse.

Louisa was anxious to see her daughter again and waited near the lighthouse window, watching for the couple’s return. She saw them as they tried to make their way back that afternoon, but the winds had picked up and the boat struggled to reach the lighthouse. Several times the boat got caught up on the rocks, and John had to get out in the water to push the boat free. At one point, one of the oars was washed out to sea. Louisa watched the entire ordeal, unable to help.

Finally, John called out to her. “We’re going back to the mainland until the winds die down. Keep the light burning until we get back.”

Just as Louisa started to answer, a large steamer ship passed between her and the small boat.  Not able to see the boat again, she feared it had been struck by the larger ship and the couple had drowned. Although she was distraught, she had to keep the light burning as John had asked. Louisa stayed awake in the lantern room the entire evening, afraid to sleep and unable to eat, praying for the safe return of Martha and John.

The next day, there was still no sign of the couple. Sometime later, a man in a boat came to the lighthouse to tell her they had been found alive but exhausted after washing up on another shore.

Relief washed over her and joy filled her heart when Louisa realized she would see her family again. Thank you, God, for restoring to me the joy I thought I had lost.

“Weeping may endure for a night, but joy comes in the morning.” Psalm 30:5

“Then the angel said to them, “Do not be afraid, for behold, I bring you good tidings of great joy which will be to all people.” Luke 2:10