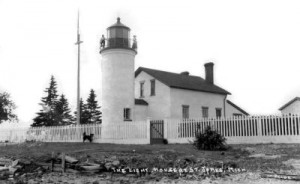 “Ship out there in trouble.” Lightkeeper Clement Van Riper nodded toward the water as he rushed into the kitchen, grabbing his slicker hanging by the back door. “I’ll try to get a couple men from their crew to come with me to Mackinaw for more help.”

“I also heard the sails flapping, the captain shouting orders.” Wife Elizabeth knew the sounds all too well, sounds she dreaded whenever a storm struck. As her husband dashed out the door, she hurried to the attached lighthouse tower, running up the steps to keep watch.

Her breath caught as she saw her husband struggle to maneuver the lighthouse boat in the churning waves while making his way to the helpless ship. Where did he get the courage? Soon she lost sight of him and the boat, then spent the rest of the evening waiting for his return.

As the dim light of morning appeared, the storm still raged, and Elizabeth saw no sign of her husband or the ship he had gone to aid, it having sunk during the night. That afternoon, the wreckage of the lighthouse boat was found, but Clement was gone, lost at sea.

Overwhelmed with grief, Elizabeth forced herself to move through the day, knowing her elderly mother needed her care. Life for her had lost its meaning. What would she do now without Clement, the strong one?

“Life then seemed darker than the midnight storm that raged for three days upon the deep dark waters. I was weak from sorrow, but realized that though the life that was dearest to me had gone, yet there were others out in the dark and treacherous waters who needed the rays from the shining light of my tower. Nothing could rouse me but that thought, then all my life and energy was given to the work which now seemed was given to me to do.”*

Elizabeth became the lightkeeper of the Beaver Island Harbor Point Light, keeping the light on for the next twelve years.

Seeing the work as a gift to serve others, Elizabeth managed to overcome her grief. What gift do you have that could help someone else?

“Each of you should use whatever gift you have received to serve others, as faithful stewards of God’s grace in its various forms.” 1 Peter 4:10

*Elizabeth Williams, A Child of the Sea, self-published in1905.