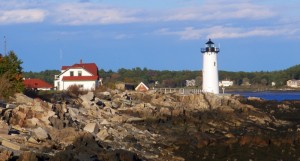 The dreaded day had arrived.

Today, they were leaving the lighthouse for another place, a new life.

At 3:34 a.m., Connie’s light keeper husband Elson woke her, inviting her to join him in the lighthouse tower once more.  Sunrise was still thirty minutes away, but they wanted to enjoy the last few minutes of the light before it had to be shut off.

Connie and Elson walked across the stone patio together and along the path to the tower. They didn’t talk, each of them filled with emotion. This was the last time they’d perform their lighthouse duty after twenty-eight years of life in the service. Each step felt heavier, weighed down by the burden in their hearts. Even though they knew someday they’d retire, some day was here, and they weren’t sure they were ready.

One final time, they climbed the spiraling iron stairs, then the ladder to the lantern room. They each scrunched through the small door to the gallery and stepped outside. As they strolled around the tower, they inhaled the fresh ocean air, watching the sky metamorphose from darkness to dawn. A rainbow of colors streaked the clouds above while Connie scanned the panorama.

From the pretty town of New Castle, up the river to Portsmouth, to the Piscataqua River Bridge, which connected New Hampshire to Maine, Connie viewed the familiar sights she loved. Across the bridge she saw the town of Kittery, Portsmouth Naval Yard, Kittery Point, Fort Foster, and in the distance, Wood Island. Her gaze journeyed to Whaleback Lighthouse in the harbor and the lighthouse on White Island. 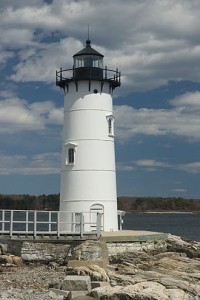 Elson understood her sadness and said, “Don’t think about it. Just keep on making plans.”

But Connie told him, “I feel like I’m leaving part of myself behind. But I do have plans. I’m going to write about lighthouses, and our life in them.”

“You’re the one to do it,” Elson said, putting his arm around her. “The time has come.”

And so she did. Connie Scovill Small wrote The Lighthouse Keeper’s Wife, one of the most thorough accounts of lighthouse life in existence. From her book, we see, feel and hear both the pleasures and the hazards of a lighthouse keeper and the effect on his family. It was terribly hard for Connie to leave the lighthouse, but by focusing on her future, she was able to proceed with hope.

Leaving something we love is difficult and depressing, but often it’s for the better, for new opportunities and for our growth and development. God has a plan for each of us, and knowing that gives us hope and helps us embrace change.

“For I know the plans I have for you,” declares the Lord, “plans to prosper you and not to harm you, plans to give you hope and a future.” Jeremiah 29:11

Have you ever had to leave something or someplace behind?

The above story was taken from The Lighthouse Keeper’s Wife, by Connie Scovill Small.