Legacy of a Lighthouse

Legacy of a Lighthouse

Artist rendition of Lighthouse of Alexandria

Pharology – is it the study of pharaohs? Sounds like it, doesn’t it?

However, the word comes from “pharos,” and refers to the first lighthouse known in history.

The Lighthouse of Alexandria was built on the island of Pharos at Alexandria, Egypt, between 280 and 247 B.C. to guide mariners into the harbor. At a height of approximately 400 feet, it was one of the tallest man-made structures in the world for hundreds of years and is known as one of the Seven Wonders of the Ancient World.

Made from huge blocks of stone, interlocked and sealed with molten lead to protect it against the water, it had three levels. The lowest level was square, then atop that was a smaller octagonal section, then on top of that was an even smaller circular section. At the very top was a mirror which reflected sunlight during the day, while a wood-burning fire provided light at night.

From the writings of Julius Caesar to Josephus to Chinese historians, the lighthouse was mentioned as a prominent feature in the world while it stood.  Its image and design have been preserved and copied in buildings and artwork for centuries since, even though it is now gone, victim of earthquakes. Yet perhaps its main legacy is the word it conceived – pharology – or the study of lighthouses.

Like the other wonders of the world, the Alexandria Lighthouse has faded into history, its glory a thing of the past. We marvel at what man has made, even when we know it will not last. Yet daily, we see wonders God has created – beautiful sunsets, marvelous animals, stunning landscapes. These are timeless wonders we often overlook, and yet they are part of the legacy God has left us. Thank God for the wonderful things He has done.

“Many, Lord my God, are the wonders you have done, the things you planned for us. None can compare with you; were I to speak and tell of your deeds, they would be too many to declare.” Psalm 40:5 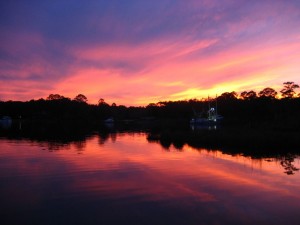 Sunset on the bayou