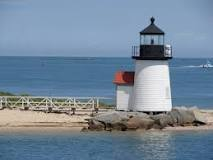 But it holds another more unique characteristic. It is probably the most rebuilt lighthouse in existence, having been preceded by eight other structures in the same location. Several times it has been rebuilt because the previous one burned down.

Like most early lighthouses in the continental United States and around the world, it was constructed of wood. Since the first lighthouses were lit by candle power or burning oil, all it took was a strong wind to blow the open flames out of control, where they quickly consumed the buildings that housed them.

No doubt, each time a lighthouse burned, it was a tragedy to the local people as well as the ships at sea that depended on them for safety. But soon the ashes were swept away, as the need for a new lighthouse became more important than the loss. Every time a lighthouse was rebuilt, the new structure was stronger than the previous one.

This week, the season of Lent began with Ash Wednesday. Ashes have been associated with mourning, loss and grief since before recorded history.  During Lent, ashes also represent a death to our own failures as we contemplate the passion of Christ when he went to the cross. But the good news is that as we look forward to Easter, we celebrate new life and new beginnings, and a life far better than the one before.

As it says in Isaiah 61:3, that the Lord will comfort all who mourn, to bestow on them a crown of beauty instead of ashes.

Thank God, our ashes are swept away, and our lives are replaced with something more beautiful and everlasting.