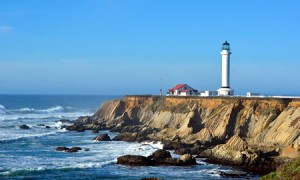 “Coal’s here! You boys get the wheelbarrow and bring it to the house,” Light keeper Willie Corbett of Little River Lighthouse instructed his three sons.

“But Dad, we just finished our other chores and were going to play a game of baseball,” oldest son Myron protested.

Coal was vital to keep their home warm during the cold Maine winter, and the delivery was the only one they’d get until the spring thaw.

So Myron and his two brothers Neil and Purcell walked to the other side of the island where the lighthouse tender dumped fifty-pound sacks of coal. Back and forth the boys went from the keeper’s house beside the lighthouse to the opposite shore to get the coal and haul it uphill, across the island, then unload it into the basement of the house.

While the boys were assigned the heavy duties, their three sisters helped their mother keep the house clean, cook and do laundry.

Everyone in the family had chores to do on the island, like light keeper families at other stations.

One of the first jobs children were allowed to do was help polish the brass in the lantern room of the lighthouse. This was an ongoing job, as dust and smoke from the burning lamps could dull the finish and get on the prisms, which prevented the light from shining properly. Tedious and monotonous as the job was, it was vitally important and one the district inspector especially scrutinized. 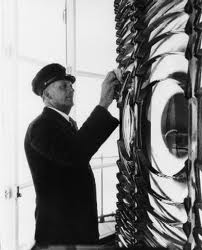 The inspector also examined the keeper’s house for cleanliness. At Point Arena Lighthouse, Keeper William Owens and his wife Cora Isabel kept their six daughters busy. Daughter Diane remembered that her mother made a game out of polishing the floor. She took an old pair of pants and sewed a pillow in the seat, so when she waxed the floor, one of the girls sat on the seat while the other girl pulled her around, polishing the floor in the process.

Seamond Roberts, in her book Everyday Heroes, said that although her father was the official light keeper, her mother was a light keeper too, helping her husband with his job. And when the keeper was ill or injured, the family had to step in to make sure the light kept shining.

These are just a few of the examples of how lighthouse keeper’s families shared their work load. Life at lighthouse stations could be dangerous, difficult and demanding, but everyone working together was essential to the welfare and success of the lighthouse, as well as, the family.

“Two are better than one, because they have a good return for their labor: If either of them falls down, one can help the other up. But pity anyone who falls and has no one to help them up.” Ecclesiastes: 4:9-10