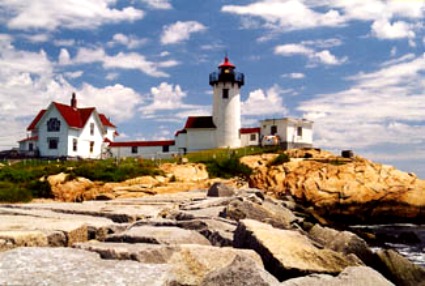 Massachusetts’ Gloucester Harbor is known as America’s oldest seaport, supporting fishermen, whalers, traders and even smugglers since 1616. The area is also known for its dangerous currents, ledges, and storms which claimed 779 vessels and 5,305 lives between 1830 and 1910.

But another danger also lurked in the waters nearby – the Gloucester Sea Serpent. The first recorded sighting of the monster was in 1848 by John Josselyn Gent. Gent raised his gun to shoot the monster, but was stopped by an Indian who said killing the serpent would bring bad luck. In 1817,  Amos Story, future keeper of Gloucester’s Ten Pound Island Light, reported seeing the beast. He said, “I saw a strange marine animal that I believe to be a serpent… His head appeared shaped much like that of the sea turtle and he carried his head from ten to twelve inches above the surface of the water.” Story ‘s wife also reported seeing the serpent lounging on the rocks, thinks at first it was a log until it slithered into the water. Sixteen other sightings reported the monster who was nicknamed “His Snakeship.” Although the town offered a $5000 reward, the beast was never caught.

Sightings of His Snakeship continued along the coast of Massachusetts during the 1800s. Often seen near lighthouses like the Eastern Point Lighthouse, the creatures were thought to be attracted to the towers or its lights.

Theobold Rooney, keeper at St. Andrews Lighthouse at Sand Reef off New Brunswick, Canada, reported a sea monster passing his lighthouse in 1906. Rooney claimed the beast was twenty to thirty feet long and had a snakelike head. 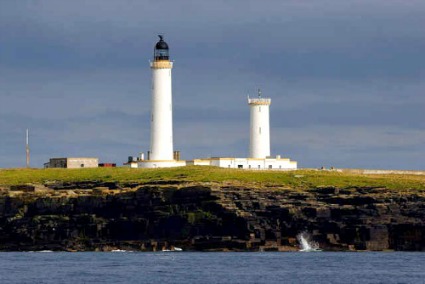 At Scotland’s Pentland Skerries Light, lightkeeper John Brown reported a huge sea creature near his lighthouse. “A great object rose up out of the water; anything up to twenty to thirty feet … it was round-shaped and appeared to have a head.”

Sea monsters were also sighted on the Pacific Coast. Not far from the lighthouse on Discovery Island, a family was sailing when they heard a loud noise behind their boat described as a grunt or a snort. They looked back and saw a large creature watching them. The greenish-brown beast had a distinct head and serrated markings along its back and sides. The animal dove and resurfaced farther away, still observing the people in the boat before it dove again. Other sightings of a snakelike, toothed dorsal fin, ninety to one hundred feet long, dark green or brown, hissing, snorting creature were reported in the area as well. 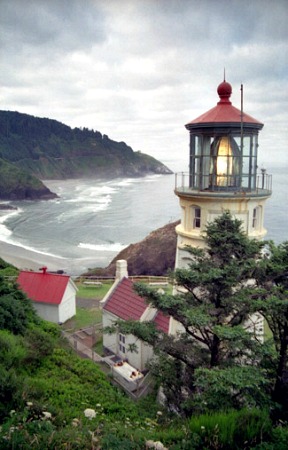 The first mate aboard the Columbia River Lightship reported seeing a sea creature in 1934 he named “Colossal Claude.” He described Claude as about forty feet long with “a neck some eight feet long, a big round body, a mean-looking tail, and an evil, snaky look to its head.” Three years later the creature was sighted by a fishing trawler off the Washington Coast and two months after that was reported fifty miles south near Haceta Head Lighthouse. A couple who saw the creature described it as having a horselike head with ears and a seaweed-colored mane. Its neck and back had a row of bumps.

In 1953, the creature was sighted near New Dungeness Lighthouse in Washington, then in 1969, two fishermen sighted it near Discovery Island Lighthouse, British Columbia, noticing its “large red eyes and short ears.”

Various theories exist as to what these creatures are, if in fact, they’re real. Some suggest they’re species that have survived since prehistoric times. Others propose that sea monsters may just be large whales or sharks, frightening creatures concocted by overactive imaginations. Movies such as The Foghorn, The Monster of Piedras Blancas, and even Godzilla have preyed upon these sightings. Strangely enough, a lighthouse is usually depicted as the victim of the creature in these films. 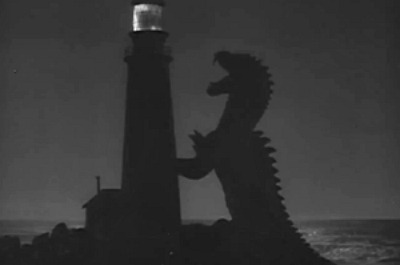 from the movie, “The Foghorn”

Do you believe such creatures exist? “Leviathan” is referred to in the Bible several times, including the book of Job, believed to be the oldest book of the Bible. Translated from ancient Hebrew, the word means “coiled or twisted” and refers to a sea serpent. So sea serpents existed at some time, but do they still exist?

“So God created the great creatures of the sea and every living thing with which the water teems, and that moves in it” Genesis 1:21 (NIV)