Lighthouses and the San Francisco Earthquake

Lighthouses and the San Francisco Earthquake 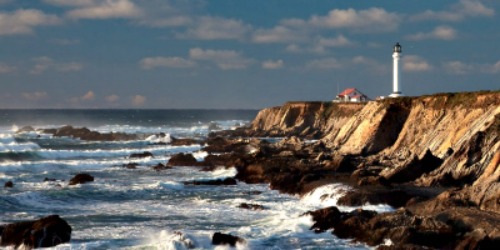 The first thing Emily Fish, keeper of Point Pinos Lighthouse, located a hundred miles south of San Francisco, noticed was the strange behavior of her animals. They were uneasy about something, something she’d soon record in her logbook. As the building began to tremble and sway, she made this entry.  “At 5:30 a.m. violent and continued earthquake shocks jarred the lens causing it to bend the connecting tube and loosened the lens so it was unstable, and also enlarged the crack in the tower.”

Her daughter, Juliet Nichols, keeper of the Point Knox Lighthouse, saw the scene unfold  from her station on Angel Island across the bay from San Francisco. Juliet reported how she watched in horrified disbelief as the city’s shoreline crumbled into the sea. Soon the skyline erupted into flames as smoke blackened the horizon while Juliet’s lighthouse remained unscathed.

“A heavy blow struck the tower from the south. The blow came quick and heavy, accompanied by a heavy report. The tower quivered for a few seconds, went far over to the north, came back, and then swung north again, repeating this several times. Immediately after cam rapid and violent vibrations rending the tower apart, the sections grinding and grating upon each other; while the lenses, reflectors, etc., tin the lantern were shaken from their setting and fell in a shower upon the iron floor.”

Surprisingly, the light from the heavily damaged lens was not extinguished until daylight, when it was discovered that the brick tower had cracks running from top to bottom, damaged beyond repair.

And on Alcatraz Island, Lighthouse Keeper Henry W. Long recorded the destruction of San Francisco he witnessed from across the bay. In his logbook he wrote, “5:30 A.M. Violent and continuous earthquake – San Francisco on fire…Is this the end of the world?… Terrible seeing S.F. from here.”

The earthquake caused a slight crack in the lighthouse tower and toppled the chimneys in the dwelling’s roof.

Imagine the fear these keepers felt as they experienced the devastation of this tremendous earthquake. Did they think the world they knew would never be the same again? Did they wonder if they’d survive? Or did they feel helpless, knowing the situation was out of their control?

Sometimes our own worlds are rocked – perhaps not by an earthquake, but nonetheless, by life-changing events. At times like these, will we be overcome with fear, or will we trust in God to bring us through?

“Therefore we will not fear, though the earth give way and the mountains fall into the heart of the sea” Psalm 46:2