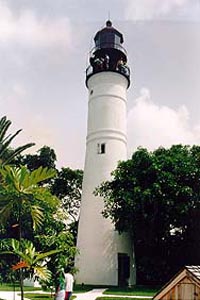 “Finally. They’re all asleep.” Barbara Mabrity sank down in the rocker on the front porch of the keeper’s cottage.

“All six of them?” Her husband Michael, keeper of the Key West Lighthouse, was seated in the other rocker.

“Yes, dear. All six.” Barbara sighed and glanced around. “Why it’s bright as daylight out here tonight.”

Michael stood and extended his hand to his wife. “Come with me.”

“Where?” She stood took his hand as he lead her down the steps.

Michael winked, and nodded toward the lighthouse. “Let’s get a closer look at this moon.”

Barbara stopped and pulled back, trying to let go of his hand. “No Michael! You know I’m afraid of heights! I told you I’d never go up there. I can’t do it!”

“You can. Please. I’ll be right there, holding your hand.”

Reluctantly, Barbara allowed herself to be dragged across the yard and over to the lighthouse property. “Please, Michael.”

“Barbara, trust me. You can do this. Besides, I might need your help someday.”

Barbara cocked her eyebrow. “Help you? I can’t imagine that.”

“Come on.” Michael tugged her gently toward the steps and they began to walk up.

Pointing below them, she shuddered. “It’s so far down there.”

“Barbara, look up. Don’t look down. Don’t look back. Just keep looking up and you’ll reach the top in no time.”

Barbara nodded and did as he said. When they reached the top, he opened the door in the lantern room and led her outside to the gallery. She shivered, afraid to step forward.

“Look, Barbara. Look at the moon.” He encircled his wife with his arm and pointed. “It’s a blue moon, the second full moon of the month.”

As her shoulders relaxed, she allowed her eyes to scan the expanse before them. The giant moon laid a brilliant path across the water. Sky met water as far as the eye could see, the stars dotting the heavens with tiny bits of light.

“I knew you would like it, once you reached the top.” Michael hugged her close.

She smiled. “I’m so thankful to be able to see this marvelous view. And all I had to do was look up.”

Barbara Mabrity became her husband’s assistant, and when he died of yellow fever a few years later, she was appointed lighthouse keeper. Barbara maintained the Key West light until she was 80 years old.

“Lift up your eyes and look to the heavens: Who created all these? He who brings out the starry host one by one and calls forth each of them by name.” Isaiah 40:26