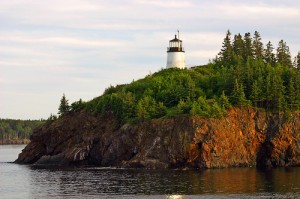 On a winter’s day in 1850, a small schooner anchored in Rockland Harbor, Maine, while the captain went ashore. Staying behind with the boat was a seaman named Roger Elliott, first mate Richard Ingraham and his fiance’ Lydia Dyer.

Near midnight a violent storm blew up, tossing the schooner with such force that the cables holding it snapped, sending the ship across the bay toward the rocks at Owl’s Head. As it smashed into the rocky ledge below the light-house, the three people onboard huddled  under blankets on the deck while icy waves pummeled them.

As the schooner broke apart, Elliott managed to escape the ship and climb over ice-covered rocks to the steep shore.  He stumbled onto the lighthouse road, startling Keeper Henry Achorn, who happened to be passing by in his sleigh. Quickly, Achorn took the exhausted, chilled man to the keeper’s house where he was given a hot beverage and a warm bed. Through frozen lips, Elliott managed to tell the keeper about the couple still onboard the ship.

Keeper Achorn rounded up some neighbors who went down to the shore and found the wrecked schooner stranded on the rocks. Onboard the man and woman were encased in a block of ice. Although the couple appeared to be dead,  the rescuers were determined to save them. The men managed to get the block of ice off the boat and carry it uphill to the keeper’s house where they chipped the ice away from the bodies. Achorn was certain he felt a slow pulse, so the couple was placed in cold water.  Slowly the temperature of the water was raised while the rescuers massaged and moved the victims’ limbs.

After almost two hours, Lydia Dyer showed signs of life. An hour later her fiancé opened his eyes and said, “What’s this all about? Where are we?”

The next day they were able to eat, and in a few months the couple fully recovered. The “frozen lovers,” as they became known, married and raised a family of four children. And as far as we know, they lived happily ever after.

We all like happy endings, especially to love stories. Love that lasts forever is a universal desire. Yet forever is sometimes hard to grasp in our changing world of uncertainties. Is there really such a thing as “love forever?” Yes. And I am thankful there is a God who gives it.

“Give thanks to the Lord, for he is good; his love endures forever.” 1 Chronicles 16:34

Happy Valentine’s Day! You are loved!