Home » Love in a Gift
Previous Next 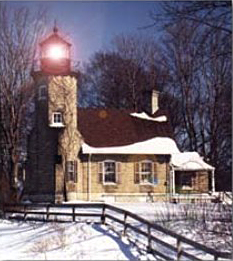 ‘I hear a plane!”  The children cried out as they raced outside the lighthouse. It was Christmas Day as the plane bearing the name Flying Santa circled overhead.

Waving their arms and jumping up and down, the boys and girls ran to collect the bundles that dropped to the ground. “Thank you, Santa!” the children called to the plane as it flew on to its next remote destination.

It all began in 1929, when Capt. William Wincapaw, a skilled pilot, wanted to show his appreciation to the lighthouse keepers along the New England coast whose lights had guided him through many perilous flights. He bundled up packages of items the keepers and their families would value, like books, gum, coffee, tea and toys, then flying low and close to the beacons, dropped them off on Christmas Day.

When Capt. Wincapaw heard how much the gesture had meant to the people of the lighthouses, he decided to continue the practice. Thus began a tradition that has been carried on until this present day – first by his son Bill Jr., then continued by Edward Rowe Snow, noted historian and author, and now by Friends of Flying Santa, who use helicopters to deliver the gifts.

Taking over in 1936, Snow was the Flying Santa for forty-four years, with his wife and daughter joining him in the project, often riding along in the plane as the bundles were dropped. The family collected gifts throughout the year, filling their home with donations and many items bought with their own money so that lighthouse families received their holiday bundles. Mr. Snow extended the range of the deliveries to include US Coast Guard stations and lighthouses from the East coast of the US to the West, as
well as Michigan.

When Christ came to earth, He was God’s gift to mankind, a selfless act of love to show us how much God cares and let us know we have not been forgotten. This fourth Sunday of Advent, we recognize the love that came down to us in a manger some 2000 years ago.

“For God so loved the world, He gave His one and only son, that whoever believes in Him will not perish, but have eternal life.”  John 3:16 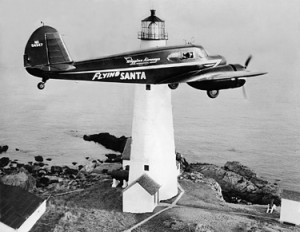