What People are saying about Marilyn’s Books

I don’t give high reviews lightly. This book took me back to another day when ALL good books were well written and just told a story- a good story; and one worth reading. In fact I couldn’t believe that this book had only come out recently and not back around the time it took place. Another thing that impressed me was not only was it obvious that the author had researched the historicity (if that’s a word) of the settings and people- she also had the characters act true to the time period.

This is a great book – held my attention to the end! Very good development of characters, location, and historical events. The mystery kept me reading! I highly recommend it!

The Gilded Curse is a bit of mystery, history, and romance. Marilyn has the ability to put you in the WW II era and setting as if you were living in that time. The story-line keeps you engaged and the novel is a page turner. I look forward to a sequel. 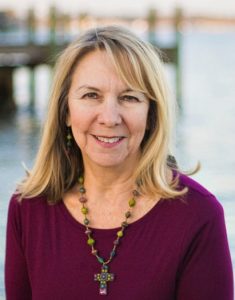 Marilyn Turk loves to study history, especially that of lighthouses and the coast of the United States. To date, she had written the Coastal Lights Legacy series – four Civil War era historical fiction books set around Florida lighthouses, and two historical suspense stories set in WWII America, The Gilded Curse and Shadowed by a Spy.  Her historical romantic novella, The Wrong Survivor, is part of the Great Lakes Lighthouse Brides Romance Collection. In addition she has written Lighthouse Devotions – 52 Inspiring Lighthouse Stories, based on her popular lighthouse blog. (@ https://pathwayheart.com)

The Florida resident and Louisiana native is a graduate of LSU’s School of Journalism. After moving from the Atlanta area to Florida, Marilyn retired from a career in food service sales and began her next career as a writer.  Her work has appeared in a number of inspirational publications including Guideposts magazine, A Joyful Heart, A Cup of Christmas Cheer, Daily Guideposts, The Upper Room, Clubhouse Jr. Magazine, Chicken Soup for the Soul, and Lighthouse Digest magazine.

But they took their lighthouse interest a step farther when they served as voluntary caretakers two summers at the Little River Lighthouse off the coast of Cutler, Maine. The second year, they took their seven-year-old grandson. The lighthouse is located on an island at the southern tip of the Bay of Fundy whose tidal change can be from 15-18 feet. Although Marilyn is a diehard Southerner, she loved “their little lighthouse home. It’s a totally different world than any I’ve ever lived in. The weather is seldom really hot with highs maybe in the low 80’s and can change daily. The first summer we stayed at the island, we ran fans one day and the next had to turn on space heaters. But the beauty and almost uncivilized landscape is wonderfully refreshing. Plus we loved the people of the friendly small town, where almost all are lobster-fishermen.”

Marilyn is a popular speaker and is available to speak on motivation, writing, and lighthouses.