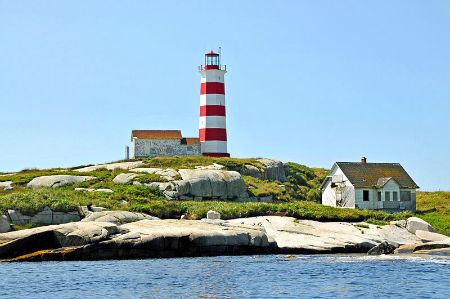 From his bedroom window in the small coastal village of Ingonish, Nova Scotia, young Barry MacDonald could see two lighthouses. Barry’s father and grandfather were fishermen, so Barry spent a lot of time around the harbor, often visiting the lighthouses. Sometimes he even accompanied the lightkeeper as he performed his duties, such as manually lighting the kerosene light and extinguishing it daily.

When Barry became an adult, he moved away from his hometown, expecting it to remain the same as it was in his childhood. But a tremendous storm in 1983 destroyed many of the wharves and buildings on the harbor, including the lighthouse that had stood guard since 1887. The shock of losing the lighthouse convinced Barry to do whatever he could to preserve lighthouses for the future. 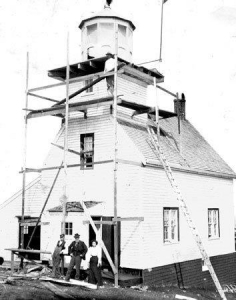 In 1988, Barry joined the Nova Scotia Lighthouse Preservation Society (NSLPS) which led to a position on its board, and eventually a twelve-year term as its president. He and his wife Anne Marie became involved in securing national legislation to preserve and protect lighthouses across their country. Their efforts were rewarded when the Heritage Lighthouse Protection Act was passed in 2008.

Barry’s favorite lighthouse is the Ingonish South Lighthouse, the one he first fell in love with. He has many great lighthouse memories, but one that stands out for him was his first visit to Sambro Island lighthouse. Built in 1758, it is the oldest surviving lighthouse in North America and probably Canada’s most famous.

As Barry entered the lighthouse, he was awestruck by the realization that lightkeepers for two hundred fifty years had walked through the same door and had watched history pass by – ships going to war, ships bringing immigrants, local fishermen who relied on the light to guide them safely home. At that moment, Barry realized how important his preservation work was. 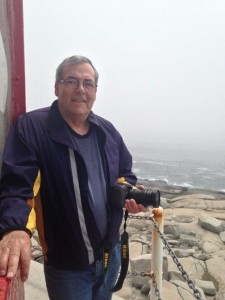 He has received awards from the NSPLA and has also received the Governor’s Award from Canada’s National Trust for his work on the Lighthouse Protection Act.

Barry’s message to others who love lighthouses and realize the importance of these iconic symbols of maritime history, “Roll up your sleeves and get involved! You will be richly rewarded as I have.”

Barry and his wife live in their own lighthouse, a lifelong dream come true.  Built as a retirement home,  the couple did much of the work themselves. 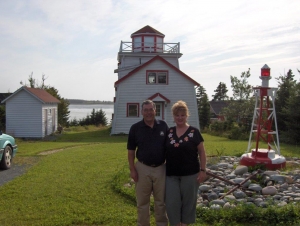 Barry and Anne Marie in front of their lighthouse.

Thank you, Barry and Anne Marie, for your work to preserve lighthouses!

“Remember the days of old; consider the generations long past.” Deuteronomy 32:7