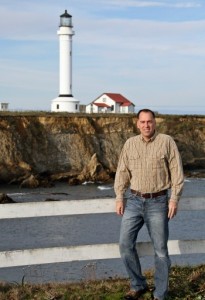 Kraig Anderson was bitten by the lighthouse bug during a business trip to the Outer Banks, North Carolina, where he saw Bodie Island Lighthouse and Cape Hatteras Lighthouse for the first time. The desire to see more lighthouses triggered a quest that led him to spend all his vacation time visiting them  until he’d seen every one in the United States, accomplished on a trip to Alaska in 2007. In addition, Kraig has seen most the lighthouses in Canada as well. 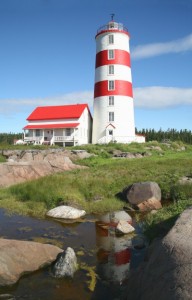 When several of his friends also became interested in lighthouses, they joined him on his trips. In 2001, one of those friends gave him the domain name lighthousefriends.com for his birthday, and he began to develop a website about all the lighthouses in the U.S. and Canada.

Kraig’s website is devoted to sharing a wealth of historical and current information about lighthouses in North America. Photos he took on his visits complement the data.

Often asked what draws him to lighthouses, he replies that the attraction is better understood when one experiences visiting them. “Part of their appeal is the sheer beauty of their settings, such as rugged coastlines or sandy beaches. Words fall short when describing a sunset while standing on the gallery outside the lantern room.”

Kraig enjoys visiting remote lighthouse and those where you can spend the night and savor the experience. His favorite lighthouse is Haceta Head, Oregon, where the setting is spectacular, and you can spend the night in the keepers’ duplex and enjoy a seven-course breakfast. On his first stay there, he and his friends were instructed by the keepers to take their flashlights and hike up to the lighthouse at night. At the top, they turned off the flashlights as directed and stood with their backs against the tower, watching in silent awe as the brilliant beams of the still-active first-order Fresnel lens slowly swept around them, a truly, breathtaking experience.

His most memorable lighthouse experience was the chartered helicopter trip he took out to remote Cape Decision and Five Finger Islands in Alaska’s Frederick Sound. While there, Kraig met the crew restoring the tower and watched humpback whales so close he could hear them breathing. 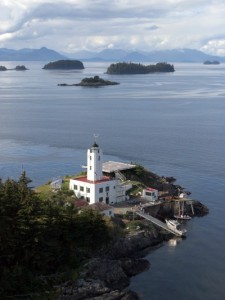 Kraig says lighthouses “appeal to our nostalgic and artistic senses” as some of the most historic structures in the country, exhibiting amazing architectural detail. “Built to endure the ravages of the elements in exposed locations, they were also built as monuments to engineering and design. With hewn rock foundations, spiral staircases, sloping conical towers, ornate waterspouts, detailed window trimmings, lantern rooms filled with giant Fresnel lenses and topped by spherical ventilator balls, lighthouses are simply beautiful structures.”

Besides the structures themselves, lighthouses are attractive because of the heroic rescues associated with them. Kraig’s website records these stories of how, in addition to tending the light, many keepers risked their own lives to save others.

To Kraig, lighthouses stand as beacons of safety and security, and their imagery of light appeals to the spiritual side of people. For them, the lighthouses symbolize He who is “the Light that shines in the darkness,” reminding us that we should also let our “lights so shine.” 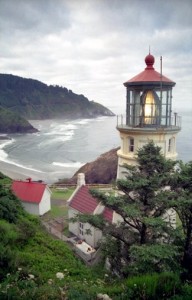 “Let your light so shine before men, that they may see your good works, and glorify your Father which is in heaven.” Matthew 5:16