Memorial Day at the Lighthouse

Home » Memorial Day at the Lighthouse
Previous Next

Memorial Day at the Lighthouse 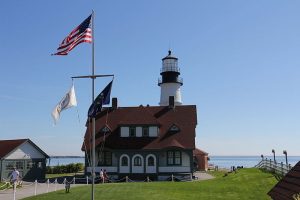 “Here they come!” Nine-year-old Tommy shouted from the front porch.

Polly dried her hands with the dish towel and followed Emily, Tommy’s little sister, to the front door.

Sure enough, coming over the top of the hill were men, women and children toting blankets, chairs and baskets. They surveyed the area, then claimed their spots to set up for picnics.

“Look at all the boats!” Emily pointed toward the water.

They turned their heads in unison to see boats of various types and sizes putting down anchors or pulling into shore where possible. Sailboats and motorboats displaying American flags dotted the bay and shore.

Polly couldn’t help but feel her children’s contagious enthusiasm. She was excited to see people too. After months of isolation at their remote lighthouse home, she was eager to welcome civilization again.

It was Memorial Day weekend, the beginning of summer vacation time. For the next three months, the “summer people” would arrive daily. Some would stay the whole season in their cottages, while many others came for just the weekend or a day’s outing.

Picnics, cookouts, and lobster feasts, accompanied by laughter and fun, were a welcome change from long, lonely days of fog and cold. The lighthouse was a major attraction to the area, so Polly expected curious visitors to stop by, interested in seeing how lighthouse families lived. 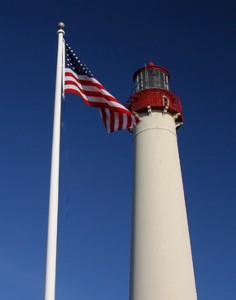 Cape May Lighthouse with flag, photo by Chuck Turk

“Let’s go raise the flag. Would you like to help me?”

“I will! Let me!’ Tommy raced to the flagpole.

“Me too!” Emily ran behind.

As Polly helped the children hoist the flag, her heart swelled with happiness.

When the flag reached the top, Polly put her hand over her heart and said, “Ready, salute,” and she and the children recited the Pledge of Allegiance together.

“Momma, do we have Memorial Day to start summer?” Tommy asked.

The question jolted Polly as she realized how he had made the connection.

“Oh no, Tommy. Memorial Day means much more than that. It’s the day we honor those people who gave their lives serving our country.  People like my grandfather died fighting for us so we could be free.”

Tommy gazed up at the flag waving in the breeze. “My teacher said the flag represents freedom.”

“So they died so we could raise our flag.”

“And that’s why all these boats have flags too, to celebrate freedom?” Tommy motioned to the vessels in the water. 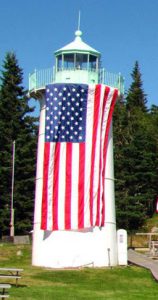 Thank God for the freedom we have and for the men and women who died to give it to us.

And thank God for the spiritual freedom Christ gives us.

“It is for freedom that Christ has set us free.” Galatians 5:1