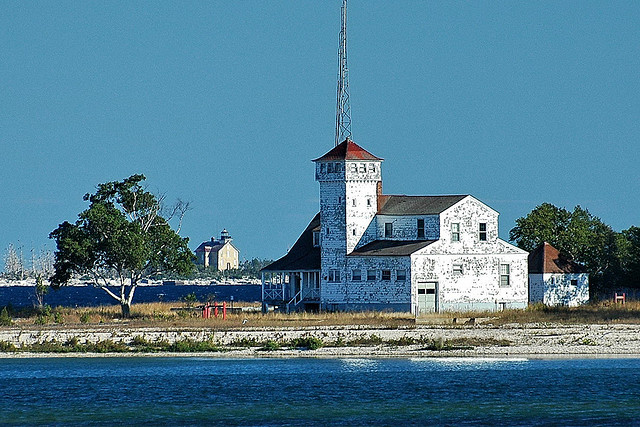 Plum and Pilot Island Lighthouses, photo from flickr by bearhuelman

The French named it Porte des Morts in the 1700’s. In English, the name is Door of the Dead, sometimes referred to as Death’s Door. Below it lies the bones of hundreds of ships.

Death’s Door is a narrow channel of water between the tip of Wisconsin’s Door County Peninsula and a group of islands which form a line separating Green Bay from Lake Michigan. Early mariners attempting to reach Green Bay used the strait as a convenient shortcut to save hours and miles off their journey to the port instead of continuing farther north and entering past the islands.

However, Door County’s Death’s Door Strait is said to be the site of more shipwrecks than any other body of fresh water in the world, and rivals ocean sites for navigational mishaps due to the dangerous shoals extending out from the shores.

In 1848, Congress appropriated money for a lighthouse to be built on Plum Island, which lies in the center of the strait. However, it became apparent that this lighthouse was too far inside the channel to help mariners, so in 1858, another lighthouse was built on tiny Pilot Island at the southern entrance. Using  the two lighthouses as guides, mariners could avoid the dangers that had claimed so many ships.

Successful travel through the strait depended on a ship staying the course, paying attention to its location and not wavering too far to either side. When storms whipped up in Lake Michigan and churned up water into tumultuous swells, the task of navigating the strait became even more difficult.

Like those ship captains who knew the importance of staying in the narrow channel, we too, must choose to follow God’s path through life. It may not be the way everyone else is going or what everyone else is doing. It might not be the most popular way or the easiest way either. In addition, there will be storms and obstacles that try to get us off course. But God’s way is the best way and the best plan for our lives.

Which path will you choose – the narrow way or the broad one?