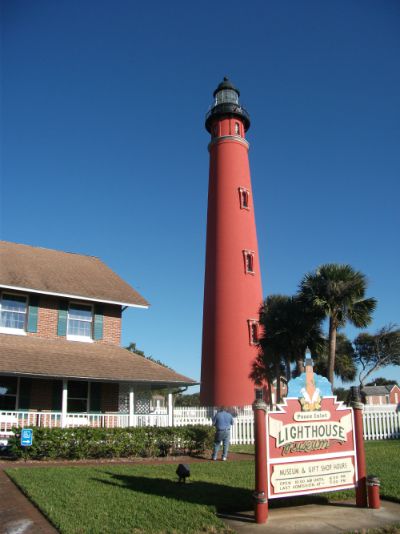 Raise your hand if you want to go to Mosquito Inlet!

If you’ve had any experience with those pesky insects, you might think twice.

Mosquito Inlet was the exit point for two rivers in Florida – the Halifax River and the Hillsborough River. In the early 1800’s, the inlet was important to cotton, rice and orange plantations to transport their goods to the Atlantic Ocean and distant ports. In 1830, a petition to Congress was signed by plantation and ship owners from Mosquito County requesting a lighthouse for the inlet due to the difficulty in finding the inlet without one.

In 1834, Congress approved the funds for the lighthouse and the first one at the location was lit in 1835. However, the lighthouse was underpinned by storms and ravaged by attacks by the local Native Americans, making repair work impossible to that the tower and keeper dwellings washed into the sea.

Despite efforts to have the tower reconstructed, it wasn’t until after the Civil War that one was approved, and not begun until 1884. By then, the river traffic had dwindled, but the tower was approved to provide a coastal light midway between St. Augustine and Cape Canaveral. 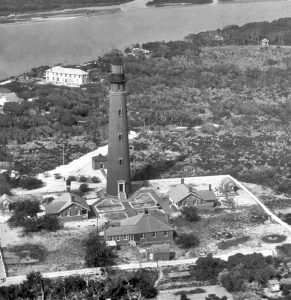 Over a million bricks were used to construct the new Mosquito Inlet’s 175-foot lighthouse, the only brick lighthouse taller is Cape Hatteras and the tallest lighthouse in Florida. Separate dwellings were built for the head keeper and two assistants, with the four structures laid out with brick walkways connecting to form the shape of a cross. A brick woodshed with a privy was built behind each dwelling, and a storage building was constructed for the station’s oil. The lighthouse was first lit in 1887.

In 1896, lightning struck the lighthouse, destroying the electric call apparatus used for summoning the relief keeper. Two years later, the gallery outside the lantern room was rigged with a spar and halyards, and the keepers were supplied with signal books, a set of international code flags, and a pair of marine glasses so they could communicate with offshore vessels.

Although Mosquito Inlet was the accurate name for the location, the name also kept people from settling in the area. So in order to attract more residents, the name was officially changed in 1926 to Ponce de Leon Inlet. Named for the famous explorer to Florida, the lighthouse also received a new name as the Ponce de Leon Inlet Lighthouse.

It’s interesting to note that Ponce de Leon is associated with the mythical “Fountain of Youth,” which would magically give eternal youth, essentially, new life, to those who drank its water. Although the story and the fountain have never been historically proven, people like to believe something exists that would make their lives forever better.

Today, the Ponce de Leon Inlet Lighthouse station is one of the best-preserved lighthouses in the country, thanks to the community that has grown up around it and given it new life.

But there is no Fountain of Youth. Or is there? In the Bible it says, “Therefore, if anyone is in Christ, the new creation has come: The old has gone, the new is here!” 2 Corinthians 5:17

I’ll choose that new life over mosquitoes any time. 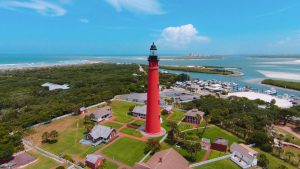