One Good Thing About Being a Lighthouse Keeper

One Good Thing About Being a Lighthouse Keeper 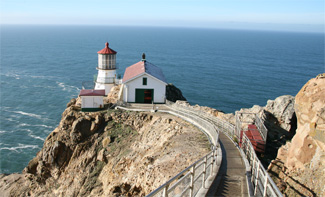 What was I thinking? Lighthouse Keeper William Hicks grasped the railing of the long staircase down to the Point Reyes Lighthouse, his head leaning forward into the ferocious wind. Of all the occupations he could have chosen, why did he decide to be a lighthouse keeper?

Occasional gusts threatened to knock him over as he continued down the three hundred plus steps to the lighthouse at the end of the point. The foghorn needed more fuel after blowing continuously for five days. If Keeper Hicks hadn’t known the lighthouse was at the end of the stairs, he could easily believe he was walking into an abyss at the bottom, not able to see the structure in the dense fog. But he’d only stop briefly at the lighthouse before steeling himself to walk even more steps below it to the fog house perched on a ledge above the Pacific Ocean.

There was little comfort knowing that he shared this bleak existence with three assistant keepers, now resting at the keepers’ house at the top of the cliff. All of them had left friends and family to serve in the isolated station. Each man hoped that someday he’d be transferred to a more family-friendly lighthouse.

Known for being the foggiest and windiest point of California, the peninsula jutted ten miles out from the main coastline, resulting in numerous shipwrecks before the lighthouse was built. Keeper Hicks paused at the lighthouse and went inside to check the lantern, welcoming the respite from the fog and wind. What was out there, beyond the point, beyond the gray fog?

As he returned from the foghorn building, he noticed light penetrating the fog. It was lifting finally, thank God. Stopping once more at the lighthouse, he went up to the lantern room and stared out the windows as visibility cleared. Soon the deep blue waters of the Pacific could be seen, sparkling in the emerging sunlight. Keeper Hicks breathed a sigh of relief. He could shut off the drone of the horn for a while. He stepped outside on the gallery, inhaling the warmth of sunshine before going back down the steps.

Scanning the ocean below the cliff, he noticed some dark forms moving through the water. His heart leaped when he realized what they were. Gray whales, making their way north from Mexico to Alaska, spouted as they traveled along the shoreline. He watched as the whale calves swam beside their mothers en route to their new home, still hundreds of miles away.

Hicks smiled at the sight, happy to see this wonderful ritual of nature. After all, his lighthouse was one of the best places to see the whales. He crossed his arms and sighed. Now he remembered what he liked about this job.

“How many are your works, Lord!  In wisdom you made them all;
the earth is full of your creatures. There is the sea, vast and spacious,
teeming with creatures beyond number— living things both large and small.” Psalm 104:24-25 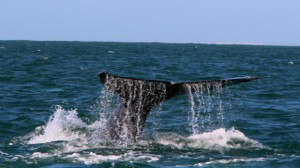