Patriotism at the Lighthouse

Patriotism at the Lighthouse 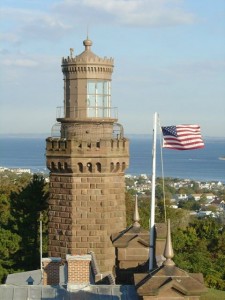 The Twin Lights of Navesink, New Jersey, were built on one of the highest points of the eastern seaboard called The Highlands. The light station consisting of two non-identical brownstone towers linked by a central keeper’s quarters, rises more than 200 feet above sea level, has been the site of many “firsts.”

In 1841, the two towers of the light were the first to use Fresnel lens, the superior navigational lighting device developed in France.

In 1883, the Twin Lights was the first light station to employ the use of kerosene.

In 1898, the light station was the first to use electricity.

In 1899, Marconi demonstrated his wireless telegraph at the site, establishing the first wireless station there.

But perhaps the most important “first” occurred in 1893, when a group of dignitaries stood atop the hill in front of the Twin Towers to hold the first national reading of the country’s new Pledge of Allegiance. As the national flag was hoisted up the 135-ft. Liberty Pole, the crowd with enthusiastically listened to the words that expressed loyalty to the United States.

I pledge allegiance to the Flag of the United States of America, and to the Republic for which it stands, one Nation under God, indivisible, with liberty and justice for all.

According to the Flag Code, the Pledge “should be rendered by standing at attention facing the flag with the right hand over the heart. When not in uniform men should remove any non-religious headdress with their right hand and hold it at the left shoulder, the hand being over the heart. Persons in uniform (or former military) should remain silent, face the flag, and render the military salute.”

As we celebrate our nation’s independence, let us remember our pledge, and our loyalty to our country. And as we display our flags, let us acknowledge the source of that freedom, “under God.”

May God bless your 4th of July. 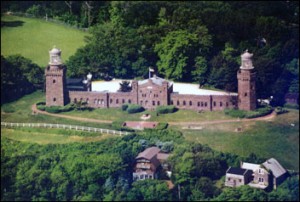